Source? Either bought with Tim’s pocket money or possibly a gift from his parents
Significance? If aliens hadn’t stolen it, he never would have used his lucky belt buckle as a substitute and if the aliens hadn’t stolen that he never would have become the hero
Fate? It wound up as part of a dragon’s wing on a distant planet
Author’s inspiration? I needed something metal, portable, and likely to be dangled in water
First appearance? Hero (1998)

The next day I rushed down to the creek again. I watched the bees dancing as I cast my line into the water. Snap! The hook had gone.
‘Trout!’ I said.
I had no more hooks, so I used my lucky silver buckle instead.
Snap! The buckle had gone.
‘Follow that trout!’ I yelled and jumped into the creek.

The hero had just moved to a new home with a nearby creek. Dad took him fishing, and told him about bees and their communication, but it was on the morning he went fishing himself that the adventure got underway. His efforts to recover his lucky buckle took  him to a distant planet when he was abducted by aliens with a mission. 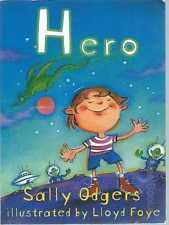 The metal-hungry aliens were collecting metal to melt to help a dragon with a broken wing… There was insufficient so Tim, remembering the derelict car on the creek bank, offered help to the aliens and salvation for the dragon.