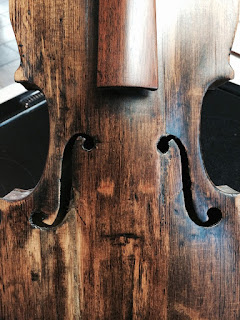 Source? Kieran made it from wood obtained from Moss Beech the Beechmaster
Significance? In obtaining the wood for his fiddle, Kieran met the love of his life
Fate? He still has it and plays it often
Author’s inspiration? I looked up the wood that could be made into violins and picked this to work in with existing series lore
First appearance? Floribunda and the Best Men

Kieran loved his family with a passion that went beyond his love of tatties, poteen and his beechwood fiddle, and considered himself the most blessed of men in green way.

Kieran Shamrock was the eldest child and only boy in a family of five. Like most traditional gossoons, he had a strong sense of family and tradition. When their parents died suddenly and quite young, he took his place as the head of the family, seeing to it that his sisters thrived. The youngest, Eileen, was ten years younger than Kieran and grew up to be a lot taller. He loved her, and did his best by her, but found her rather alarming.
When Eileen was still young, Kieran went to the Beechmaster, Moss Beech, to obtain a good piece of beechwood for a fiddle. He took his time over finding the perfect piece, because leprechaun fiddles were important, and could become treasured heirlooms. Fiddle-making was Kieran’s trade, and he was not only an accomplished musician but a pretty fair singer. While choosing his wood, he attracted the attention of a tree folk girl, beech maid Tally Beech. She was small, as tree maids always were, but unlike many she had no particular desire to live free in the forest. As Tally herself put it, when explaining their history to Sean McTavish…
“My Kieran came to the beechmaster to get wood for a fiddle. He took such care, and his hands stroked the wood like this.” She ran her fingers along his arm. “I wanted to be stroked like that. I told the beechmaster I wanted that gossoon for mine.”
By fay standards, Tally was too young to be courting, so the beechmaster told her she’d have to wait. Tally employed the time by seeing Kieran when she could, and, “Soon as I could, I made a hurry-up so he’d know it was time.”

Kieran was inordinately proud to be chosen by his beech maid bride, and he always claimed that fiddle was the best he ever made. He kept it, too, and played for many a céilí. Since he loved to dance with Tally, he taught his daughters Sinead and Ashling to play. Ashling was very accomplished; something which Kieran was sure was due to the benign influence of his beechwood fiddle.

The goal for 2017 was to write a post a day profiling the background behind one of my books; how it came to be written, what it's about, and any things of note that happened along the way. 2017 is well behind us, but I ran out of year before running out of books. As of June 2018 I STILL hadn't run out of books, but many of those still to come are MIA by which I mean I don't have copies and remember little about them. There are more new books in the pipeline, and I'm certainly showcasing those, but in between times, I'm profiling some of my characters, places and objects. Thank you so much to everyone who's come along on this journey so far!
Posted by Flora at 07:12