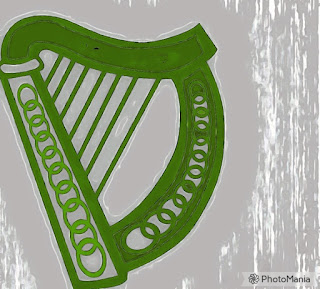 Source? It grew in a cave in Mirryam
Significance? It was one of the unique items Lilly needed to prove Mirryam was a separate entity
Fate? It is still in the cave
Author’s inspiration? I’ve seen some breathtaking rock formations in caves
First appearance? Lilly of Mirryam

'This is an elf-harp, Lilly. Listen.'
Do you believe in magic?
Do you believe in politics?
Can you believe in both?
The pocket-kingdom of Mirryam was a happy place, until Duke Bezzal from neighbouring Bellover comes up with the extraordinary suggestion that he is annexing Mirryam. His excuse? It’s entirely surrounded by Bellover and, as such, is clearly part of Bellover and should be brought back into the fold. An independent ruling say that if Mirryam can establish it has something greater Bellover doesn’t have, then it can be declared independent. The hunt is on.
One of the possibilities floated by Princess Lillianda is the elf-harp her friend Jedket showed her.

'It's something special,' said Jedket. 'Come and see.'
It wasn't quite dark in the tunnel, for a small arrow of light shone down through a cleft in the rocks. Lilly could dimly see her dusty hands and feet, but she was hardly interested in looking at herself. Instead, she peered down through the glow to where the light-arrow shone straight into a veil of glimmering crystal.
She gasped aloud at the beauty of the thing. 'It looks like some kind of musical instrument,' she said. 'Perhaps a lyre, or a fiddle...' She gazed at the curving triangle, strung across with shimmering crystal threads as fine as gossamer.
Jedket smiled, and his skin shone green in the strange light. 'This is an elf-harp, Lilly. Listen.' He touched the crystal threads and music rang from under his fingertips like moonlight on water.
Lilly stretched up to touch the bright strings for herself, but Jedket flung up his arm to hold her back. 'No, Lilly, the wrong touch could break it like the first of the winter ice. If it broke it would never sing again.'
'You touched it.'
'I know how,' he said. 'If you want to play it you can try blowing gently across the strings.'
Lilly blew, and the silvery ghost of music shivered across the harp. 'It's beautiful,' she said. 'You play again.'
She listened, entranced, as Jedket drew more music from the crystal strings. She felt she could listen all day, but then she remembered, abruptly, that Mirryam's fate was being decided outside.

The elf-harp seems the perfect proof, but when Lilly tries to display it, it proves elusive…

'Come along, Your Highness,' said Florrin. 'Show me the elf-harp.'
'It's not quite here,' said Lilly. 'It's up at the other entrance.'
Ignoring the mutters from the Belloverians, Lilly clambered back up to the flatlands above the main caverns. It took some time for the others to follow her, and when they were all gathered on the smooth green turf there was hardly room for anyone to move. It was lucky that Jedket had taken Fayfayre away.
Lilly edged through the trees to the tunnel entrance. 'It's in there!' she said.
The duke was close behind her, and he clicked his tongue impatiently at the sight of the narrow tunnel, but Florrin knelt and peered down into the hole. 'I'm afraid I can't see anything,' she said.
The duke sniffed. 'Salt,' he said. 'Rock salt. We have any amount of that in Bellover.'
'You have to climb in and creep along a little way...' Lilly's voice wavered as she realised that the tunnel was a tight fit for herself and Jedket. Florrin was taller than either of them and would find it difficult to get inside. 'Anyway,' she said, 'if you call out "hello" and make an echo, you'll hear the music from the harp. You don't have to see it to know it's something special.'
'This is some sort of trick,' said Duke Bezzal. 'Have you got some village bumpkin down there with a tin whistle?'
'There's no-one down there now,' said Lilly.
Florrin ignored the duke. 'Hello?' she called softly.
'O-o-o-o?' The echo was there all right, but it was an ordinary echo.
'Wait a moment...' Lilly slipped back into the tunnel. Although Jedket had gone, she knew where to find the elf-harp crystal. 'I'll show you,' she called back softly over her shoulder. 'I can blow across the stings and you will hear the music.' 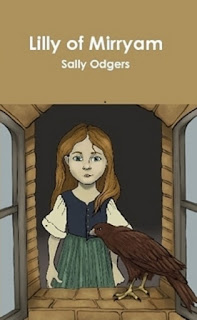 Bending low, she hurried along the tunnel, her sandals scuffing through the chips of rock-salt. 'It's in here,' she added, but it was not. The sunshaft shone down on a bone-coloured knob of rock-salt.
Lilly's feet crunched along the tunnel until her reaching fingers touched the smooth dead end. She licked her fingers, tasting salt. This was indeed the end of the way. Sadly, she retreated into the light.

It took a while before Lilly understood what was going on.