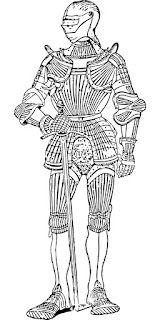 Source? It appeared by magic whenever Simon found himself in Braveria
Significance? It was a symbol of his status in that world and also a symbol of his obligations because it forever needed polishing
Fate? It no doubt lurks in Braveria awaiting Simon’s return
Author’s inspiration? Obviously a knight needs armour
First appearance? Knightfall (2001)

Simon scrabbled with strangely stiff fingers and shifted part of his helmet. Light flooded through the gap. He jammed his elbows into the ground and forced himself into a sitting position, staring in astonishment at shiny silver legs.
He'd turned into a robot?
Clank.
"Art thou feeling better, Sir Knight?"
Clank. Simon peered at the silver gloves on his hands. Then he had a closer look at his legs. "Hey, that's armour!" he exclaimed.
"Of course, Sir Knight! What else would thou wear on a quest?"

The armour might look cool, but it took a lot of maintenance as Simon discovered. The irascible wizard Bookerstaff, who was Simon’s mentor and trainer in Braveria, had strong opinions about its upkeep and no excuses were permitted.

"We must begin thy training without delay," announced Bookerstaff. "First, thou must learn to care for thine armour."
"I don't-"
"Silence, knave!" Bookerstaff waved the ladle. "That armour is a disgrace!"
Sulkily, Simon waited while Bookerstaff stalked around him.
"Thy helmet," said Bookerstaff, tapping it, "is dinted, and must be hammered straight. Thy boot is covered in dragon scratches, it must be polished. Thy greaves art dusty and must be rubbed with silk. Thy surcoat is marred by dirty finger-marks, and must be scrubbed with lye-"

"Those aren't my finger-marks," objected Simon. "Becca grabbed me on the haystack."
"Had I not, thou would now be dragon droppings," Becca pointed out.
"You don't know that."
"True," said Becca. "Such a flop-eared lout as thou would stick in the throat of the doughtiest dragon. Thou might make spittings, but never droppings."
Simon tried to think up a good retort, but the ladle was flashing like a baton as Bookerstaff continued to criticise. "Thy gauntlets creak, (jab) they must be powdered with corn-starch. Thy knee joints must be oiled with goosefat (rap). Thy breastplate (tap) will be burnished with sand, ashes and vinegar."
Simon considered asking if this was all, but he suspected Bookerstaff mightn't see the joke. It had been an exhausting day, and he feared it wasn't over yet. 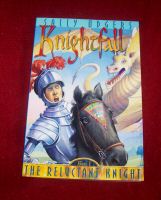 Not only is the armour inconvenient, high-maintenance and uncomfortable, but it leads to strange conversations with even stranger characters.

"Relax, Sir Knight!" said the dragon kindly. "Here is a riddle. Why is it dark inside a suit of armour?"
Simon was usually good at riddles.
However!
#1   He was in a strange world.
#2   He'd fallen off his horse.
#3   He'd fallen on a dragon.
“I don’t know," he admitted. "Why is it dark in a suit of armour?"
"Because of the knight inside," said the dragon.

Simon landed, helmet first, in a slithery, prickly mass. He wondered what he'd landed on. It couldn't be the ground. Armour protects a knight from lots of things, but not from being dropped by a dragon to land head-first in a yellow brick road.

So there it was… the armour was a pest and a problem. It wasn’t fool proof, but it was part of being a knight and Simon just had to get used to it.