Source? Kerria found herself unexpectedly holding it in her teeth while brandishing a sword in her hand. Ultimately, it must have come from Ben’s or Luke’s brain and, prior to that, it was in the air as a staple of the adventures they were parodying in their animated series. 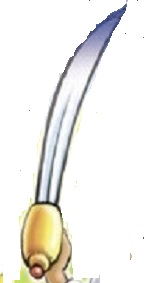 Significance? It was a symbol and a symptom of Kerria’s existence
Fate? It was dismissed when Kerria returned to the grey place.
Author’s inspiration? It came to me via the same route as if came to Ben and Luke.
First appearance? Kerria Logan and the Pirate Caper (2003)

I was swinging a sword in one hand and clutching a cutlass in my mouth. The cutlass tasted pretty terrible, so I guess in was covered in pirate sweat…
“Arghhh!” I yelled fiercely, because that’s what everyone else was doing. That meant the cutlass fell out of my mouth. I caught it in my hand and swung it at the nearest pirate…

Kerria Logan was doing nothing in particular when she found herself in this predicament. All she knew at that point was that she was a heroine, her name was Kerria Logan and she didn’t belong on a pirate ship with a cutlass in her mouth.
Neither did she belong on Dubloon Island digging for treasure, acting as a stowaway or battling with a giant squid. She managed all these activities with aplomb, but it wasn’t as if she wanted to. She had no choice. Neither did the squid.
After she cut up a pirate’s hat with the cutlass, things went rapidly pear-shaped. Then, abruptly, Kerria was in a grey place, listening to two nerds named Ben and Luke plotting against her. That’s the way it felt, anyway.
Blink. She was stowing away on the pirate ship. She didn’t want to! The pirates were fighting, and one fell out of the rigging.

I scurried across the deck on my hands and knees. On the way I picked up the sword and cutlass dropped by the pirate when he fell out of the rigging. 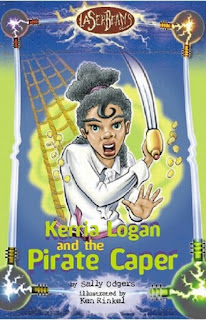 Then she was trying to push a barrel over, so she could hide inside…

That’s when I ran into more trouble. I’m pretty strong, but no matter how hard I pushed, I couldn’t roll that barrel over. And there were pirates everywhere!
There was nothing else for it. I’d have to show myself. I put the cutlass between my teeth and jumped up onto the barrel, swinging my sword…
That was where she came in, and Kerria got increasingly frustrated. Eventually she figured out what was happening, how it was happening and even why. It just remained to find a way to stop it so she’d never have to hold a cutlass in her mouth again... unless she wanted to, of course.