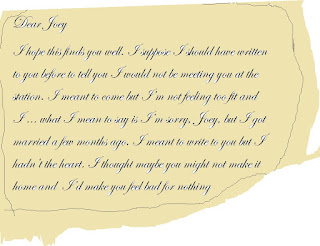 Source? Written by Dorothy O’Riley to let Joseph know she’d married someone else
Significance? It knocked all Joseph’s plans for six and ruined his trust in women
Fate? He crumpled it and threw it away at Park Street station
Author’s inspiration? It was a convenient way to have Joseph at a loose end after the war
First appearance? Heather & Heath

Joseph McKenzie returned from France in 1919 expecting to meet his fiancée, Dorothy O’Riley, at Park Street station. When she wasn’t waiting for him, he assumed it was her habitual unpunctuality although after years apart it seemed a bit much…

A flotilla of hats and frocks brought him hope, for Dorothy always wore clothes of the latest mode, but the eyes met his unrecognisingly, and the ladies passed him by. Mothers and fathers were there, grandparents, frail and joyful. Envious schoolboy brothers, worshipful sisters ... at last there was only a handful of people left on the platform and Joseph had to accept that she had not come. But maybe she was ill? Or perhaps her father's car had refused to start. He wondered if old man O'Riley still had the same Humber; it had never been reliable. Well, he would go to her, and they would laugh over the silly circumstances which had kept her from the station. And perhaps a less public reunion would be more satisfactory, after all.
Joseph shouldered his kit bag and turned towards the exit of the station, but a porter was approaching with a letter in his hand. 'Excuse me, sir, was you expecting a Miss O'Riley?'
Joseph nodded with relief and took the letter. Some silly little circumstance ... He slit the envelope with an impatient thumb and read the single sheet through.
Dear Joey...
He read it again. His hand slowly crumpled the page and he tossed it away into the darkness.

We never find out exactly how Dorothy worded the letter, but the content is revealed during Joseph’s introspection on a train…

It was a new day in a new year. A bitter young man in a well-worn uniform was reading the newspaper in the north-bound train, simply for something to do. It was not his own newspaper; it had been left on the seat by some passenger who had disembarked at the last station. Joseph McKenzie was not looking for anything in particular, for there was nothing to interest him in Tasmania now. Dorothy O'Riley had found and married a better prospect some months before; married him while her betrothed crouched in a trench in France re-reading her few letters and creasing her photograph a little more each time he removed it from his pack. She hadn't even bothered with the formality of a 'Dear John' letter until he had already returned. 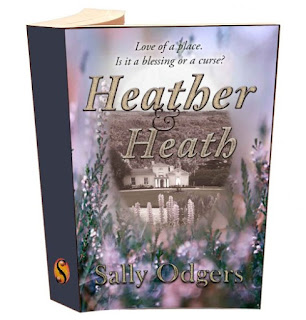 So, there it was. She’d never been much of a letter writer, after all.


Joseph and his Dear John letter appear in Heather & Heath.