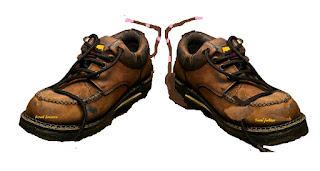 Source? With Flax, it’s probably better not to ask
Significance? They were proof Flax was, well, feral
Fate? Worn whenever they could produce maximum discomfort to observers
Author’s inspiration? They just came to mind

***
Flax put on her hacked-feather skirt with caterpillar stockings and her rat-heeled boots. She hoped there would be food at the party.
Footnote. These are heavy boots with little rat tails at the back. Bad fairies love them.

Yes, Flax is back for another entry. She is one of those insistent characters who loves a good Object.

Flax was feral, so she wore feral clothing. The rat-heeled boots were idea for stomping about, kicking and annoying other people, especially when the rat-tails whipped fetchingly about Flax’s ankles.
When Flax got into trouble at Miss Kisses’ Academy, she was sentenced to a disciplinary pinking, but luckily for Flax it was incomplete.

Presumably, Flax found comfort in the boots. They were always evident when she flew.

She flapped along, her rat-heeled boots just clearing the rocks and grass.

…and they could be readily weaponised when Flax was kidnapped.

Flax did a handspring. Her rat-heeled boots hit Miffsy’s nose.

They were also handy for reflecting her mood.

Leaving the mouldering mansion behind them, the bad fairy and the dog-fae set off for the old barn. Flax’s rat-heeled boots jigged with glee, and the dog-fae waggled its furry tail as it perched on her shoulder. “It’s a pity I hate you so much,” said Flax. “Otherwise, we make a very bad team.”
“Rrrrrrr,” said the dog-fae.

After perplexing the kidnappers, Flax grabbed the ransom.

Her rat-heeled boots kicked joyfully as she skimmed along, clasping the ransom to her chest.

It was all excellently bad until…

Flax kicked the ground. Her rat-heeled boots seemed to be turning fuzzy and pink.  She could feel the tide of sweetness sneaking over her. The bag of ransom money was making her shoulders ache. After all, what use was human money to a fairy? Human money could be used only to buy human goods—

But of course, Flax got her revenge, and the rat-heeled boots tramped happily into her future.

Flax stamped about in her rat-heeled boots, offering plates and packets and smiling sweetly.

…and as anybody but a good fairy knows, when a bad fairy smiles sweetly it’s time to be out the door.
ABOUT THE BLOG

The goal for 2017 was to write a post a day profiling the background behind one of my books; how it came to be written, what it's about, and any things of note that happened along the way. 2017 is well behind us, but I ran out of year before running out of books. As of June 2018 I STILL hadn't run out of books, but many of those still to come are MIA by which I mean I don't have copies and remember little about them. There are more new books in the pipeline, and I'm certainly showcasing those, but in between times, I'm profiling some of my characters, places, objects and themes. Thank you so much to everyone who's come along on this journey so far!
Posted by Flora at 09:21