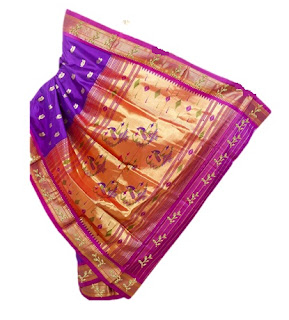 Source? Diya had it made for her wedding to Dev
Significance? It was her most beautiful possession
Fate? Diya wore it when she boarded Ganges for Shiva, and would have packed it up for Meera to wear if she married
Author’s inspiration? I wanted Diya to have a symbol of beauty and hope

…she went to her sandalwood chest and unfolded the saree, a gorgeous confection of purple and gold silk.

Diya Singh had married her husband Dev in a wedding saree of purple and gold silk, bordered with glittering leaves. It was bright and gorgeous and Diya was delighted with the picture she made. A few years later, things were less rosy. Diya loved Dev and their son Jameel but she longed for a daughter, and a recent ruling of one child per couple had put that out of her reach. The desire played on Diya’s mind and she became remote and depressed. She started to toy with the idea of suicide. She hid a sharpened knife in the folds of her saree for use when the pain grew too much. She planned to put on the saree for the last time then.
Salvation came just in time when Dev put everything he could raise into a lottery for residence on Shiva, a place that encouraged childbearing.
Against enormous odds they won a place, and Diya…

…wearing the wedding saree, took the hands of her husband and son and boarded the shuttle that would carry them to the great river’s namesake where it waited in orbit.

Life on Shiva wasn’t quite what Diya had imagined, but she bore her daughter Meera Nihira and felt, for a brief space, the most fortunate woman alive.
Years later, when Diya, Dev and Meera returned to Terra with Meera’s friend Ram Chatterjee, Diya would have brought the saree along, in case Meera decided to wear it.

Diya and her family appear in the Elydian Dawn series.