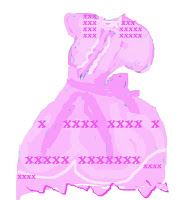 Source? Miss Kisses bestowed it on the reluctant Flax.
Significance? It was pink and puffy and didn’t suit Flax at all
Fate? Flax traded it in for a pair of stolen overalls
Author’s inspiration? I wanted to give Flax something she would regard as horrible while others might like it

Instead of her hacked-feather skirt and caterpillar stockings, she now wore a puffy pink fairy frock with a frilly hem and a pattern of tiny pink cross-stitched kisses.

Flax the feral fairy was quite unfitted for life at Miss Kisses’ academy, but she thought it was the last straw when Miss Kisses announced she was to be forcibly pinked. The hag Kirsty Breeks kindly interrupted proceedings, but Flax still found herself clad in a dress she found quite unsuitable.
Fortunately, she could take it off, and she did so when she went back to the dormitory.

Flax reached for her clothes, but all she could find was the fluffy fairy frock. It was too cold to go out bare so she dragged it on.
… Her wings swished and swithered through the slots in her pink fairy frock. She ignored the dog-fae. The night wind ruffled her kiss-trimmed petticoats, and her spiky hair. Flax wanted her old clothes back but Miss Kisses’ pinking spell was too strong.

Flax went snowdropping and stole a pair of green velvet overalls. The last we saw of the Pink Puffy Good Fairy Frock was when Flax… 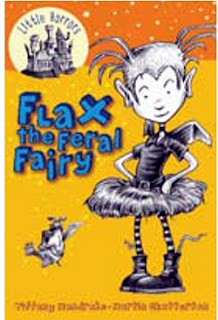 …put her other leg in the overalls and hauled off the frilly fairy frock. She dragged the straps of the overalls over her shoulders and reached behind to adjust her wings.

Goodness knows what happened to the frock in the end. Maybe the overalls’ owners thought it was a fair exchange.

The goal for 2017 was to write a post a day profiling the background behind one of my books; how it came to be written, what it's about, and any things of note that happened along the way. 2017 is well behind us, but I ran out of year before running out of books. As of June 2018 I STILL hadn't run out of books, but many of those still to come are MIA by which I mean I don't have copies and remember little about them. There are more new books in the pipeline, and I'm certainly showcasing those, but in between times, I'm profiling some of my characters, places, objects and themes. Thank you so much to everyone who's come along on this journey so far!
Posted by Flora at 00:31