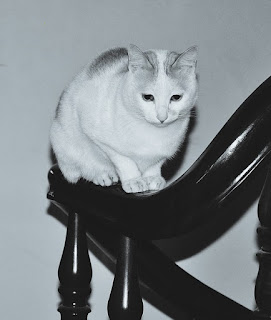 During the 1980s, LeeLee Grene had a black cat she called Millie. Despite the name, Millie was male; an unsettling cat that made a point of sitting on the stairs of the Over Here B&B which LeeLee and her husband managed with help from LeeLee's brothers. Millie was a fay tom, and so long-lived, but by the late 2000-teens, he'd presumably gone where good cats go. When LeeLee's daughter Promise visited the B&B after a long absence she was pleased to find Millie's grandson, Magpie, still in residence.
Like his predecessor, Magpie enjoyed sitting on the stairs, spooking guests. He was black and white, and so not able to loom so well in the dark corners, but he made the most of an intense stare and a sinister tilt to the whiskers.
Magpie's first (and to date only) appearance is in I Promise- (coming soon as of October 2018)