Source? Jane donated it and made it over to fit Anna
Significance? This was the first dress Anna had for dancing in as “Miss Anna Bailey”
Fate? Anna kept it, but most likely lost it in the fire at Kelly’s Castle
Author’s inspiration? I’d been reading up on period costume and how colonials usually wore them out of date 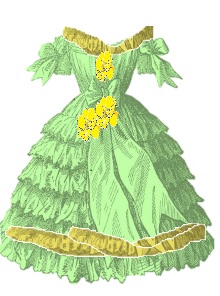 It was a flounced gown in a soft, delicate green, designed in the manner of a decade before to be worn over many petticoats.

When 1856 was coming in, Charles Colby suggested he and his wife Jane might go to a New Year’s dance at Perry House. Jane protested that ladies in her condition didn’t attend dances, but decided to go anyway, as the old rules hardly applied in the colonies. Charles opined she and Anna would be danced off their feet and, when Jane demurred, he said certainly Anna should go. As Jane had said old rules hardly applied and so what if Anna had been their indentured convict and was now their free servant.

Anna—when we arrive at the dance you will be introduced as ‘Miss Anna Bailey’. You must refer to me as ‘Mrs Colby’ or ‘Jane’, not ‘Ma’am.’”

“…I believe I have the very thing tucked away in my chest! I wore it in London, but I fear I have grown plump since then and it is hardly appropriate for one of my advancing years. Of course, it is not just in the current mode.”

For the first time since childhood, Anna put on a dress which had not been chosen strictly for serviceability. It was a flounced gown in a soft, delicate green, designed in the manner of a decade before to be worn over many petticoats. The bodice was cut low off the shoulders showing a deep decolletage.
“I wore long white gloves with this, and had flowers pinned to the skirt and shoulders,” remembered Jane. “I thought I was very fine, and Mama was very disappointed when, after all the trouble she and the modiste had taken, I simply did not take. But then, how would I? I was no slender young thing even then, and these gowns were designed for ladies with hand-span waists. I believe the modern ones are even fuller below and tighter above.”
Protesting, Anna put on the dress. It was too short, but Jane declared she could let in a band of colour above the lowest flounce. “It will overlap, and we can make rosettes of the same colour to trim the waist and bosom,” she decided. “You will look quite the young lady of fashion, Anna.”
Anna tugged at the neckline, which seemed indecently low.
“I think perhaps necklines have risen a trifle,” said Jane with a twinkle. “According to the fashion journals Mama sent me last year. Shall we make a flounce up there as well?”

Anna didn’t expect to dance, but she attracted the notice of Mad Jack Kelly, a charming adventurer. Or rather, her dress did.

“Have I the honour of addressing a fellow exile from the fair land of Erin?” he asked in a marked and not unpleasing brogue. “I see you are wearing the green.”

Anna refused his request for a dance, but Jack was determined.

Anna shrank back in her chair, wishing Jane would come to her rescue. She disliked being the centre of attention, certain that the neckline of Jane’s remodelled gown was too low, even with the extra flounce. Surreptitiously, she tugged it upwards.

Jack monopolised Anna for the evening and made an excuse to call on Charles on a business matter the next day. Anna was sure his interest in her would have waned because…

…Her sensible grey dress and long white apron were much less becoming that the pale green confection she had worn to the dance.

That was the last we heard of the green gown, but Anna’s appearance in it as “Miss Anna Bailey” had lasting consequences.