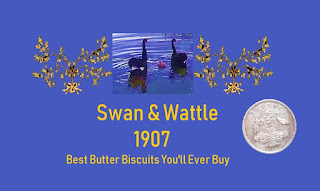 Source? It was a commemorative tin, probably bought the same year as they had their photo taken
Significance? It held the cake Aelfthryth and Harry ate during their holiday in 1910
Fate? The mystery probably meant Alfey and Hendry kept the tin… and the sixpence
Author’s inspiration? Biscuit tins used to be very beautiful and reused for years
***
We found fruitcake in a biscuit tin and shared it, and we made a tiny fire in the range and boiled the kettle.

Aelfthryth and Hereward, the young couple adrift in time, valued every minute they were able to spend together. In 1910 they were lucky enough to surface in a replay close enough in time for their previous identities, Alfey and Hendry, to be still alive. They went to their cottage in Sydney, half frightened and half delighted, to visit their former selves, but the older couple had gone away.
An elderly neighbour explained their absence…

They be off to Melbourne to see their grandson's childer.

They would be gone only a week, but Aelfthryth knew she was very close to going into Replay and would almost certainly not be there when Alfey and Hendry returned…
The neighbour entered the cottage to water the plants, and then went off. What Aelfthryth and Harry didn’t know at the time, and not until a long, long time later, was that the old woman was a heriad, a distant relation of Harry’s who was part of a long line of descendants pledged to help Harry and Aelfthryth in any reasonable way… She knew exactly what she was doing when she entered the cottage in front of them.

We found the key to the cottage under the step where the old woman had returned it, and Harry let us in. We closed the door behind us and locked it again from the inside, and then we looked about us in the gloom.
…
I sat down in one of the well-upholstered settles and took a deep breath, clinging to 1910 as hard as I could. I don't want to go without you…
Harry sat down beside me. Aelfthryth…
Yes! I said. Let's have our holiday here.
I suppose you can guess what happened then, Saranna? We spent the rest of the afternoon and the night in that cottage.

We found fruitcake in a biscuit tin and shared it, and we made a tiny fire in the range and boiled the kettle. We even wrote a note of thanks, and Harry put a sixpence in the tin where the cake had been. But we did not forget Elvie and Harry-the-Postman who would be left behind us. We did nothing that could cause them any harm.
Or so we thought at the time.

Leaving the note and the sixpence was an honest action, but it would have confused Alfey and Hendry when they returned. Maybe they thought it was just a pair of young lovers seeking shelter… or maybe something tweaked their memories and gave them a mystery that would never be solved.