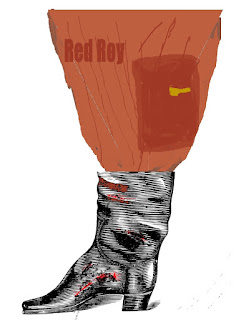 Source? Red Roy probably carved it himself
Significance? It came in handy for storing rubies and played a key part in the sinking of Red Queen
Fate? Still in use, though probably painted navy now
Author’s inspiration? Pirates have peg legs, right?

Red Roy took an extra fistful of rubies and hid them in the hollow compartment in his best peg-leg.

Red Roy, captain of the pirate ship Red Queen, had two peg-legs; his best and his second best.
He usually wore the best one.

‘Wait,’ said the captain, tapping his best peg-leg thoughtfully on the deck…
He put his second-best peg-leg into the treasure chest for safekeeping.

The pirates went into town to buy supplies and due to an oversight, no one was left to guard the ship. It drifted and sank, together with Red Roy’s second best peg-leg. He still had the one full of gems though. In fact, he’d landed on his feet (well, one foot and a peg) because within six months he was an admiral in the navy and had changed his name.

About six months later, Navy Kate was watching Admiral Navy Roy polishing his best peg-leg which was still a’rattling with rubies.
All of a sudden she gasped and said, ‘O-oh.’
‘O-oh what?’ asked Admiral Roy, still preening the leg.

Admiral Roy looked at his best peg-leg. It was a splendid leg with a hollow in the shin for storing those extra rubies, but it did not have toes... Instead, it had a built in boot.

It was lucky he was wearing that one when the ship went down, but the second one did turn up. Red Kev, the ex-cabin boy, and his mum Red Joan, the ex-cook, fished it out of the sea, rubbed off a few barnacles and used it to solve an eeny-meeny mystery.

For more about Red Roy and his crew, check out Eeny-Meeny from In Love with the Wind and Other Stories 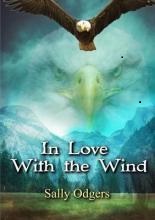