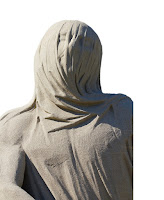 Source? Whoever laid her out provided them
Significance? Think about it.
Fate? Discarded, probably with extreme prejudice
Author’s inspiration? It would have been what was used

I woke in the crypt (and very uncomfortable it was, because the graveclothes were in worse case than I was…

When John “Suicide John” Beckingham murdered Elizabeth Frith Larssen at his wife’s behest, he didn’t do a good job of it. Elizabeth was a Frith witch, and so pretty difficult to kill. He succeeded… sort of… and was so horrified he then killed himself. Elizabeth, after a year-long nap in the crypt, woke up. She wasn’t happy. She wasn’t a ghost, either, or a vampire. No one, including Elizabeth herself, knew what she was. To her descendant Cat Mahal, she was known as kind of dead Elizabeth. She breathed only when necessary for talking or the comfort of onlookers. She didn’t age. She ate, slept, bathed and worked, but whether these were necessary or whether she just liked a routine was never clear either.
Elizabeth especially didn’t like waking up wearing tatty graveclothes, because it set a precedent. As she put it…

…there was my gazing ball, still where I’d left it. I gathered it up and took it with me to the house I’d shared with Thomas and Sarah. And who should I find but my sister Sophronia! Wed to my husband if you please! Expecting a babe, if you please! And barely a year after I’d been laid in the crypt! How she did squeal when she saw me in my graveclothes!

Cat had a chance to see this scene in action when she walked the Moonstone Way.
It unsettled here almost as much as it did Elizabeth’s sister Sophronia… but not quite, because she did know what came after.
As Cat said…

And then my hair tried to stand on end, because the sobbing continued, now mixed with singing.
This ay night, this ay night, every night and all; fire and fleet – sob – and candlelight and –sob – Christ receive thy soul.
The dirge continued, broken by sobs and cries. The light bobbed, staggered and stumbled, and now I saw the figure behind the light. It was light as a moth, dressed in white cloth wrapped tightly but with bits fluttering loose.
I gulped. It looked like an Egyptian mummy, but it wasn’t moving slowly. It tottered and staggered and sometimes flailed to keep its balance, but it was closing in fast.

Elizabeth’s daughter recognised her, but Sister Sophronia didn’t like the apparition one bit.

The other woman, obviously Elizabeth’s sister Sophronia, looked absolutely horrified. Her hands went to her cheeks and she started to shriek. It wasn’t just a squeal of surprise or joy or shock. It was a full-on screaming panic attack.

I suppose one has to have some sympathy for Sophronia! Elizabeth certainly didn’t.