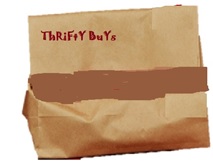 Source? Egbert used it to bag Frances’ pig-in-a-poke purchase
Significance? It served to conceal said purchase
Author’s inspiration? I’ve found it curiously difficult to get into a brown paper bag that’s been taped down with parcel tape

Fancy buying an item in a sealed brown paper bag without even inspecting the merchandise.

Frances, having just dumped her boyfriend, tried to distract herself by putting up her Christmas tree, only to find it had lost its drunken angel topper and was well past its best-before date. She went into town on a quest for a new one only to find Christmas trees as common as hens’ teeth. Surely she could at least replace the angel? No such luck…but a friendly young man at a discount shop said he’d see what he could find.

I remembered there is one fairy doll, but it’s a bit—well, it’s old stock.”
“I’d better go,” said Frances.
He looked disappointed.
“You know what?” she said brightly. “I’ll take it.”
“It’s not in the best of taste.”
“Neither is that reindeer nose. Or that elf hat, for that matter. That’s fine.” The doll was probably arrayed in a pink tutu with big tits and a lot of yellow hair, she thought, but she didn’t want to disappoint this nice boy. “I’ll take it.”

The young man, who claimed to be called Egbert,

ducked back to what was presumably the store room. Again, he was gone a while, but eventually emerged with a brown paper bag. He stationed himself behind his till. “Are you sure you want it, Frances?”
Frances eyed the bag which was sealed with heavy duty tape. “Why is it in brown paper? It’s not a—” She broke off. There were some things you didn’t say to nice boys.
“It’s—um—a novelty item. It’s not a toy—um—definitely not for kids, you know? Maybe—”

Frances reassured him and took the bag. On the bus, she…

…turned the bag over, looking for a label or even a barcode or stock number to suggest legitimacy. She pried at the tape with her thumb, but it was the broad ultra-sticky brown tape that never gave in.

Frances put her groceries on the table, picked up a carving knife and took her brown paper bag to meet the Christmas tree.

The item inside her brown paper bag is the subject of another object lesson, but suffice it to say, Frances’ life took a wondrous turn for the better.

The story of Frances and her paper bag is told in Fairy on the Christmas Tree. You can check it out HERE (though it, like Frances' mystery purchase, is not intended for children.)
Posted by Flora at 07:00