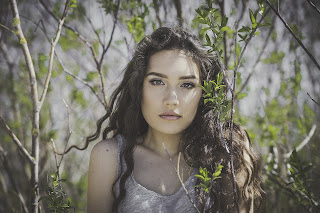 The treefolk lie somewhere just beyond the leprechauns in the range of fay. Like the sylvan, they live almost exclusively over there. It's likely they could survive over here in the human realm, but most unlikely that they'd ever want to. Treefolk, who term themselves as tree maids or tree lads, or sometimes by specifics such as beech maid, are a friendly and generally sweet-natured people. They are straightforward and inclined to say exactly what they think, which some humans and even some other fay find disconcerting. They favour pleasant-sounding names that are generally short, and use group surnames, according to their clan.
We meet several treefolk in the Fairy in the Bed series. The first one encountered is a redhead named Heidi Ash, a childhood friend of Peck Grene's. Heidi is highly empathetic, and if anyone she meets is troubled, she is troubled too.
Moss the beechmaster is the nominal head of the beech clan. He is the person the leprechaun men approach if they want beechwood for a fiddle. He also helps direct the younger clan members if he thinks they're running into danger. He has a halfling daughter named Becca, whose mother is a water maid.

Tally Beech is one of the few treefolk to venture over this side of the gateways. As a child, she used to come through to play with Flori Alexandris. Flori had no idea her friend was anything but human, and she missed Tally when she stopped coming. Moss the beechmaster had put a stop to the visits. When Flori meets Tally again she is a leprechaun's wife and the mother of four children. Everybody loves Tally, though she has a disconcerting habit of "reading" people.
Sash is another redhead, and also married to a leprechaun man.
Vith was a treemaid who enjoyed a long-term romance with a hob man, but since he lived on the human side of the gateways, they never lived together. She is a character in Pisky Business, although she never actually appears.
The treefolk aren't dryads, but they do regard trees as something special, which is probably why they choose to use tree names for their clans.