When I started writing the Fairy in the Bed series, I dealt with just one kind
of fay. As the series expanded, I brought in more. To justify having them different (they're all fay or fairies, but many of them categorise themselves beyond that) I came up with naming systems to suit each group. 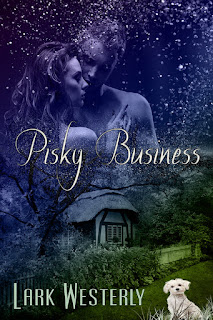 For the hobs, who tend to be farmers, bakers and brewers, I chose to use a mix of Cornish and rustic English names with a few that suggest influence from other areas around the British Isles. The first one I named is Robin "Hob" Cottman. Robin is an older English man's name, famous for its use in Robin Hood.  It's a variation on the Norman name, Robert. Cottman derives from "cotte" which we know of in cottage, but which can also mean a small area of land.  Hob Cottman's parents are Jem, an old-fashioned pet form of James, and Iris, a flower name.  Some cousins are the Cornfellow brothers (a harvest name) Patrick and Nicholas.  Others in the family are Ashby, Rufus and Harry.
Other named hobs in the series are Joss Hollander, William and Eleanor Cliff, Tansy Thrift, Geraint Trip, Nathaniel Applebee and Joan Treadwell.
The hobs align themselves with different types or strains, which mostly boil down to a strong affinity or a particular trait. So far in the series we've met harvest hobs (Nathaniel and Robin and his sons Ashby and Harry), stable hobs Joss, William and Tansy and others that think of themselves as standard hobs. Mind you, no one's sure what the Cornfellow brothers are. Since they're identical twins who married twin sisters it's likely their children might have become a new strain. Time will undoubtedly tell... if I live long enough!
Linda Hobbs Pendennis is a halfling with a hob father, but since her mother didn't know he wasn't human, her name is not from the hob "pool" although her registered surname does reflect something Mary half-heard but imperfectly understood.


The hobs and their naming system appear in the Fairy in the Bed series. Robin Cottman is in Honey and the Harvest Hob and Man Overboard, Geraint Trip is in Pisky Business Nathaniel Applebee is in Sunshower and Joan Treadwell in Tied up in Tinsel and Christmas Eve and Tansy Thrift in Court in Between. The series is at Larksinger while the books can be purchased from the publisher.