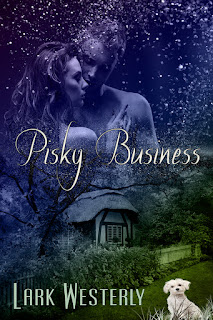 Piskies are quite closely related to pixies, but they consider themselves a very different people. The ones that live in the pisky hills have their own favoured way of dressing and they rather pride themselves on being mercurial, manipulative and vain. The men call themselves pisky men, while the women can be pisky misses or, on occasion, pisky minxes. They like to use Cornish names just as much as they like to wear silver ornaments and bindings, buckles and belts on their clothing.
The ones met so far in the series include Merryn "Merry" Pendennis, who is considered much nicer than most of his kind. Merryn has two sons and a daughter. George "Jory" Pendennis and Richenda Pendennis by his human love Rachel and Tane Pendennis by the water maid Tam.
Merry's cousin Keeley Weir Marsh is also paired up with a human, but she seems to have had the naming of their three sons, Yestin, Kevern and Caden.
Beatrice Florin is a pisky maid who has "lived human" for a long time, and Daveth Porthwellian is an acquaintance of Jory Pendennis. Jillian Jules Fraeman and her mother Zena and Jillian Jules' children are all part pisky, but once the pisky blood waters down to 25% or less, the naming conventions are less obvious.