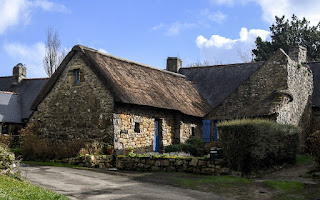 The leprechauns live mostly on the green way, which is as much a state of mind as it is a place.  (That's rather typical of over there, which has a rather different kind of physiology to our realm.) The villages are quite close to the pixie forest, which suits the leppies as they fall between the treefolk and the pixies in the fay family lexicon.
Unlike most fay groups,  leprechauns are  much more sexually dimorphic than humans. The men, who style themselves as gossoons, have quite a different skin tone from the women, who are styled colleens. The gossoons vary between an olive skin tone that might almost pass as Mediterranean, and a deep green. Indeed, as other fay are wont to say, the greener the gossoon, the higher opinion he has of himself.
Most gossoons are small in stature and assertive by nature. They cultivate prodigious memories and can recite their pedigrees back so far that, it's said, they won't stop until their non-leppy friends just stop listening.  This passionate interest in genealogy means they can generally explain quite complicated family relationships.
The colleens are also smaller than the average fay women (with the exception of the tree maids), but their skin tone is much closer to human.
This difference in colouring has caused a bit of a problem for the villages. The rite of passage called passing enjoyed by those on what you might call the east side of the pixies (who are themselves east of the leppies) is pretty much ruled out for the gossoons, because they simply look too different to pass as human. The colleens, however, pass easily and some of them "marry out" and decide to live human over here. Losing colleens to over here is something that troubles the gossoons, who then have to "marry out" themselves, usually with tree maids or elf girls. Sometimes a leprechaun will want to marry a water maid, but she's likely to react with puzzled incomprehension. Pixie misses appeal to them, but the pixie men then strop up and turn almost as green as a gossoon.
Leprechaun characters are first introduced in Green Balls, but they appear more in Floribunda and the Best Men and The Courting of Eileen, The Kissing Ring and Calico Calypso.
Kieran Shamrock is a gossoon from Shamrock Village. He has four sisters: Grainne Forge, Orla, Aine and Eileen o' the Mist. Kieran "married out" with a tree maid named Tally Beech, though in his case it was for love rather than for necessity. He has two halfling daughters named Ashling and Sinead and two sons.  His cousin is named Alannah.
Other leprechaun characters are Oisian Seekjoy, his cousin Mavourneen Tralee, Sheelagh Chalk, Calypso Lindon, Brid Buttermilk, Patsy Carpenter,  Padraig "Paddy" Horseshoe and his sister Corinna.
Sean McTavish identifies as a leprechaun, though his lineage is mostly braefolk. Because he feels more like a leppy, he courts Eileen o' the Mist. Unlike almost every other gossoon, he is able to pass.
Liam Dancey is a most determined gossoon who is determined to make the water maid Tam his bride. His three sons by her, Finn, Lee and Rye, reflect waterfolk naming traditions as well as leprechaun.
Unlike most fay, who use either hereditary surnames or none, leprechauns choose their own surname in their mid-teens. Some of them, like Kieran, go by the name of their village, while others pick something aligned to an interest or a particular event.
Sheelagh Chalk is from the village closest to the chalklands, where the hobs live, for example. Occasionally a colleen, in particular, will find the name she chose as a teenager a bit embarrassing in later life. Eileen o' the Mist found her appellation inconvenient when she came over here. As she told Sean, it seemed a good idea when she was fifteen.
For first names, most leprechauns choose traditional Celtic names, though some go for something unusual. Calypso Lindon's parents certainly had a taste for the exotic, but then, her mother's name was Corinna so possibly that branch of the family had some Greek or classical influence.
The leppies appear quite frequently in the series. They have a lot of traditions to which they are devoted.