Pixies appear early in the series and their naming habits are probably more eclectic than most. 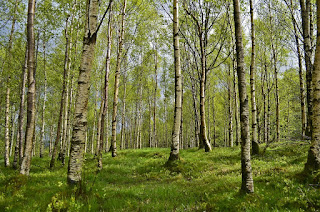 Many of them choose botanical or gemstone names, but sometimes it’s difficult to discern a pattern, even in a family.
The Peckerdale / Grene clan who are involved in one way or another with Peckerdale Grene Community Tower  are a strong presence in the books. The two patriarchs are Peter Peckerdale and Peter Grene, who are distant cousins. Their shared name means rock, so it fits the “natural world” thread of naming. Peter P (as he’s universally known when not being called grumpy old -insert noun -) is married to Pia Tillien a pixie miss  (the males call themselves pixie men) as serene as he is mercurial.
Peter G’s wife is Gentian Hillyard, who sports a botanical name. Their only child is Malachite “Mal” Grene.
Peter P and Pia had four children. The eldest is Melody Peckerdale Skipton. The second is Kristos “Kris” Peckerdale, then Alexander and finally Leilana “LeeLee” Peckerdale Grene who married Mal Grene. LeeLee’s name is botanical, while the two sons have Greek names like their father.
Melody’s half courtfolk daughter is named Ryl. This looks as if it might be short for Amaryllis, but Ryl is the whole name. It can be floral (via Amaryllis) or it might refer to a stream. Melody picked Glissando, a musical term, for her daughter’s second name; a musical theme Ryl herself continued with her own four sons.
Mal and LeeLee gave their son two family names, making him Peckerdale Peter Grene. He goes by Peck mostly. Since his wife is human, their children will probably have less odd names.
Peck’s sister is named Promise, generally known as Prom.
Kris has a son and a daughter by his leprechaun wife Calypso. They are named Corin (after Calypso’s mother Corinna) and Jisinia, which is a flower name.
Alexander has a natural son named Quinn and an adopted daughter (so to speak) named Cèilidh, but since they have a leprechaun parent each they don’t really follow the pixie tradition.
Another branch of the same family is descended from Portier Grene, a son of Berryman Grene and Clover Garth. Portier, whose name suggests pear trees and gateways, married a human. His two halfling children, Betula and Birch, have tree names. Betula is grandmother to Simon Bakewell, a trace pixie.
Other named pixies are Cambria Tillien, Casha Glen, Chance Grene, Gard Tillien, Gareth Peckerdale, Glendie Grene, Harry McFee, Jestima Grene, Kishie, Quercus Grene, Russet Fen, Shan, Tess Bryn, and York Shimmer.
So, that’s the pixies for you. Just when you think you have a handle on the way they choose to name their children, you find plenty of evidence to the contrary.