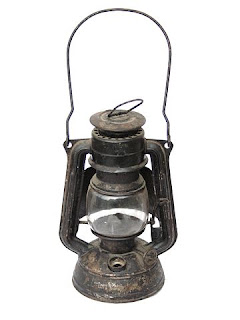 Source? Flynn had used it while camping in the cave at O’Connor’s Leap
Significance? It was part of the shocking revelation that he was no longer what he believed
Fate? Melted, dissolved, rusted…unhappened…
Author’s inspiration? It’s one of those eternal questions…
First appearance? O’Connor’s Last Stand

Even as he steadied the lantern and turned up the light from a firefly to a golden glow, he was making plans, his mind grasping hungrily at something practical it could do.

Flynn O’Connor had been holed up at the cave under the rocky hill called O’Connor’s Leap ever since he went there to wait for his Eliza in the 1880s.
Instead of Eliza, Annabel Falmouth arrived when she fell through into the cave during a sandstorm.

He raised the lantern and set it safely on a ledge of rock, where it cast long, wavering shadows across the walls of the cavern. After that, he turned to examine the thing that had fallen into his strangely eventful morning.

Flynn got to know Annabel and, being of a chivalrous nature, decided to help her with her problems while he waited for Eliza. It was only when Annabel asked awkward questions that he realised he had big gaps in his memory.
He had an impending sense that something dreadful had happened, but it took light, in the shape of a merciless sunrise and his lantern, to tell him the horrible truth.

He rubbed his jaw, as he often did when uncertain. The skin was smoothly shaven, scarcely rasping under the heel of his hand. But, when had he last taken a razor to that jaw? Not at the waterhole, not since Annabel had come, and yet he had never felt the lack of the razor before. Fear was tugging at his guts, the worm of unease he had felt too often lately. The random fragments of his discomfort were scattered and seemingly unrelated, but painstakingly, Flynn tugged them to the surface and laid them out before his flinching gaze.
Six moons gone by uncounted, a burning branch that had scathed but not branded him, a mirage that had threatened death but left him apparently untouched.
His mouth was dry, but he continued his terrible study.
A razor he hadn't used in much too long, a bone-dry water keg, a sickness of his body that had seemed to heal itself, a hand held in the flame but taken out unharmed, a terrible weight on his mind when he thought of Farrier Sean.
A shadowy meeting with Gibbons, blotted from his mind. Food and tea untasted, cloth untouched, a lantern….
"God and Mary with me!" whispered Flynn. The lantern burned yellow in his darkness, but when had he filled it with oil? Either he had done so countless times and forgot as many, or else he had never done it at all. And that, while the lantern continued to spread its mellow ambience, was the most frightening possibility of the lot.

Poor Flynn, the romantic who only ever wanted to save his lady from a bullying husband, felt he’d failed twice over. Then he saw Annabel in danger from another bully, but what could he do? After all, he was nothing but a shadow.
Flynn O’Connor died for love. He’s willing to do it again.
Flynn appears in O’Connor’s Last Stand.