Pen Swan’s Drawing of The Cat

Source? Pen drew it
Significance? It was unlike her other work
Fate? It led to the adventure of her life 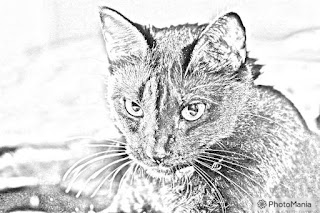 Author’s inspiration? I can’t draw so I’m fascinated by people who can, and also, writers sometimes find characters who are unlike others they create
First appearance? Pen and Ink

She could draw most things, even horses and children, which troubled so many illustrators, but her cats were unreliable. Sometimes she turned out a capable cat, but every now and then the moggy she was drawing for someone’s story book took a sudden left-hand turn and became The Cat.

Pen Swan is an illustrator. She specialises in illustrating children’s books, and, because she is quick, versatile and businesslike, she gets plenty of commissions. The Cat is her name for the animal she sometimes finds herself drawing. This is peculiar to Pen, because she’s not a fanciful person…

The Cat. That was the way Pen thought of him. She didn’t talk about him, or show him to her clients, because when she had tried to explain him to Ben [her husband], he’d laughed and told her not to be precious...
…The Cat, when it materialised, was not what the client required. Pen couldn’t tell when she set out to draw whether a cat picture was going to become The Cat. She did know he was a problem. The Cat was so much better than her usual work it made good drawings look shoddy…

The Cat is persistent. He just keeps cropping up and sometimes Pen just has to give in and let him materialise…

…she went to work on The Cat. Even in rough sketch form, he was a beautiful cat, tall, lithe and proud. As she added the fine detail of whiskers and delicate veining in the ears, she realised it was the best work she’d ever done, even of The Cat.

Pen’s drawing attracts the attention of Peck Grene, the mechanic who comes to deal with her recalcitrant car…

He looked down and spotted the drawing in her hand. “May I look?”
She handed it over and waited for some praise. It was good. Even if he was no artist, he had an appreciation for beauty. He should know it was good.
He said nothing but just examined the indigo-eyed Cat with an unreadable expression. After too long he looked up. “When did you meet him?”
“Who? You mean The Cat?”
“Yes. It’s very—”
“I didn’t meet him. He’s The Cat. He just appears sometimes when I’m drawing. I just finished [this one] today.”
Peck nodded, still eyeing The Cat.
“What’s wrong? I’m not being precious about it. It’s just sometimes my drawings don’t go as expected.”
“I never thought you were being precious. He’s beautifully done. Unusual. I thought…never mind.” He handed the picture back. “Is he going in a story book?”
“No. I keep The Cat for myself when he turns up.”
“I think that’s a good decision. The Cat is not what you want in a story book.”

Peck isn’t the only one to be taken by Pen’s drawing. Her friend Si Bakewell spots it…

He turned away and then went still for a few seconds before reaching out for The Cat. He stared at that for a while and then turned back to Pen. “That one’s different.”
It wasn’t a question, but Pen answered it anyway….
…“It’s an inked sketch. I’ve been doing them for years. Ben used to do the inking, but now I do.”
“There’s something special about it.”
“I know, and it’s not the first time I’ve drawn The Cat.”

So does the little cat that wanders in one day…

When the sun shifted away from the step, Pen got up and went inside. She left the door ajar so the cat could come in if it chose.
It did choose. It stalked over to her work station and jumped up to settle on the pile of sketches. It kneaded the paper into submission, and settled down, tucking up its tail and paws. It blinked as it purred, staring at the masterpiece version of The Cat.
“Don’t sit there. And don’t touch my inking. That’s The Cat.” Pen moved the picture out of range and lifted the cat down.
It bunched its haunches, ready to leap.
“No.”
The cat stared at her as if offended, then turned its back and sat down, facing away.

The Cat just goes on attracting attention and eventually Pen…

contemplated The Cat.
“I wish I had a real one like you,” she said to it, though where she’d find a black cat with indigo eyes, she had no idea.

At last, Pen meets The Cat in the solid, purring flesh… 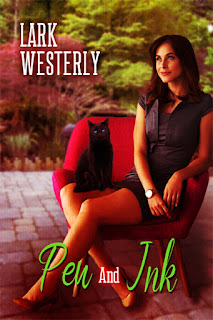 In the dawn light, she woke again to find the cat was still there [on the bed], curled like a pool of ink on the quilt. It was the blackest cat she’d ever seen, black as pitch; black as a moonless night. The purr was rhymical, and when she touched its head, the cat rose and stalked towards her. Its eyes crinkled as it ducked to rub against her chin, butting and crooning.
Pen saw those eyes were the purest indigo.
[The cat] was the biggest domestic cat she had ever seen. He was the image of her inked masterpiece, right down to the set of his whiskers.
Pen puffed out her cheeks. She knew for certain that the cat was her wish. He [was] …a magnificent companion literally made to order. He was The Cat.

Of course there’s even more to The Cat than this, but suffice it to say Pen, like any true artist, finds a way to turn her odd talent to her best advantage.