Rasputin is...a monumental grey tabby with glass-green eyes and a nose half black and half pink. 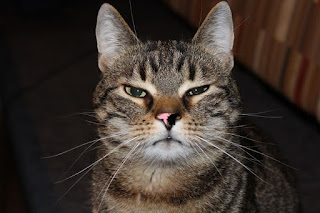 He is a fay tom, who apparently wandered out through the Sydney courtyard gateway and settled in the human realm. Why? Well, for one thing, he found a willing slave in Raph Angelus,  whose cottage has a stone wall that traps the sun. For another, he presumably likes lording it over the ordinary cats in the district.
According to Raph, Rasputin disposed of his last three girlfriends, and eats potato chips in bed. He has a loud and commanding yowl, and a disconcerting habit of staring at anyone he wants to intimidate. Fortunately, Eve Adeste is an elf, so fay toms are nothing unusual to her.
Rasputin appears in the upcoming story Christmas Eve. The only other fay tom we've met to date is Millie, who belonged to LeeLee Grene in the late 1980s. The Red Cat, Ink and Calico aren't fay toms, but manifestations of mutable fay.

The series in which Rasputin will appear and in which Millie already does is  Here.