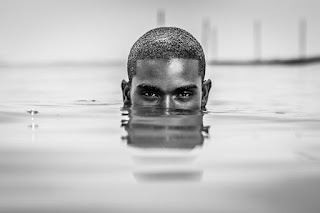 I have at least three characters with this name in my books. One is a Nineteenth Century Scotsman from Heather and Heath, one is a centaur from Hector's Garden and one is a water lad from the Fairy in the Bed series. It's the third one who is the focus of this character profile.
Hector lives at and around a waterfall pool over there. Like most waterfolk, he is sweet-natured and friendly. He is also said to be a bit more conversational than some. He is often in the company of Poll, another man the same age, and the two water maids Plie and Niss. He and another water maid named Lilla share a daughter whose name is Kin. Hector and Lilla are not and never have been in a marriage or marriage-like relationship, but Hector tells his elf friend Eve that "...we deal well together and Kin is the best thing I ever made".
Apart from Eve and the waterfolk, Hector has a number of friends, including Oash the sylvan. He's a favourite with visitors to the pool, being tall, strong and warm-hearted. He's always ready to laugh and is utterly unshockable. He expects to see the good in people and so he does.
Hector's father is named Janus, and his mother is a water maid named Ku.

Hector appears in Honey and the Harvest Hob, Sam and the Sylvan, Christmas Eve and is mentioned in Pen and Ink.