When I started writing the Fairy in the Bed series, I dealt with just one kind of fay. As the series expanded, I brought in more. To justify having them different (they're all fay or fairies, but many of them categorise themselves beyond that) I came up with naming systems to suit each group. 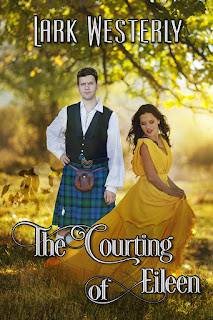 Braefolk, or braesiders, come from a hilly heathery area they call Braeside. If they're over here, and passing (i.e. masquerading as human in our realm) people think they're Scottish, and indeed they are related to Scots. The men are usually termed either men or laddies, and the women can be ladies or lassies.

Braefolk, especially the men, often have manifestations, or manis, which are a kind of magic that gives them another self. In most of the women and a lot of the men this is no more than a talent or tendency; often a skill they know without ever having been taught. With some of the men it's a full-blown other self which, as a courtfolk man tells Flori Alexandris, is the kind of person their braesider friend Hamish would have been a few hundred years before.
The braefolk with the strongest manifests know very little about what their second selves get up to. These extra personalities have their own names and agendas.
Braefolk look very like humans though built on generous lines, but their eyes give them away. They have "heathered" eyes which change colour quite obviously at moments of emotion or stress. Over here they favour sunglasses and contact lenses, though if they go without they presume people will think they're wearing novelty contacts.
The braefolk first appear in Floribunda and the Best Men when a large auburn-haired man named Hamish McTavish stands as Best Man at his friend's wedding.
Hamish has a pronounced secondary personality named McTavish, a wild hairy highlander given to "howling in the heather and scaring the grouse" as Hamish puts it.Most of the time, Hamish keeps McTavish in check, but now and then he lets him out to play. Sometimes Hamish has no say in the matter, which is how Flori came to spot a hairy highlander whooping it up in a kilt where the combed and besuited Hamish had been a second before.
Hamish comes from a strong braesider family. His father is Skirling Lachlan McTavish, his mother is Janet, usually called "Sweet Jenny". He has an elder brother named Alister who has a laird second self, and a younger one named Glengarry who can unleash a ghillie by tuggong his ear. The fourth son is termed "Wee Sean" by the brothers, but he's "wee" only by their standards. Sean's manifest is a leprechaun named Shamus and Sean himself has green eyes rather than the usual heathered colour. The family explains this by saying Sean is a throwback to a leprechaun ancestor. Sean finds this inconvenient because, as he says, he feels like a leprechaun, but the leprechaun colleens are all too small for his taste, whereas the braesider lassies say he's a bit too green for them.
One of Lachlan's sisters is named Jeannie. She appears in Midsummer Melody as one of Roderick Skipton's partners at the Midsummer Ball. Alan Adair, born in the 1940s and working as a barman at a nightclub called Kaleidoscope in Melbourne in the late 1960s, pops up in the same book.
To date, the only other braesider encountered in the series is Emer, wife of Rory Inkersoll. It is in memory of her that Rory sometimes plays the bagpipes.
The braefolk feel very close to the Scots, but because their paths split off at about the time of the Industrial Revolution, their naming system tends to reflect the Scotland of old. They often choose to play up their accents, and they thrive on plaid, porridge, oatcakes and whiskey. The men like to learn the bagpipes, though a disproportionate number of them can play them naturally. They love dancing.
Some of them, like Alan Adair in the 1960s, integrate almost entirely into the human world, but once they get back over there to their homeland, it's on with the kilt and off to the hills "oching and ayeing" as if they'd never been away.
So far, the braefolk appear mostly in Floribunda and the Best Men, and The Courting of Eileen, but they're mentioned in several other titles. Alan Adair's granddaughter Alys is due to appear in her own story at some point.
Braesiders favour traditional Scottish names, mostly from the 19th Century.
The cover picture shows "Wee"  Sean McTavish.

The goal for 2017 was to write a post a day profiling the background behind one of my books; how it came to be written, what it's about, and any things of note that happened along the way. 2017 is well behind us, but I ran out of year before running out of books. As of June 2018 I STILL hadn't run out of books, but many of those still to come are MIA by which I mean I don't have copies and remember little about them. There are more new books in the pipeline, and I'm certainly showcasing those, but in between times, I'm profiling some of my characters, places and objects. Thank you so much to everyone who's come along on this journey so far!
Posted by Flora at 12:00