The Outback might be reckoned a place rather than a character, 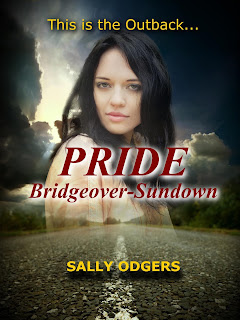 but in the book Pride Bridgeover-Sundown it is both. In the near future, (well, it was the future when the book was written) seventeen-year-old Glen Steele borrows his sister's Bradman Pride and heads off into the Outback, looking for validation and adventure. As he drives along, increasingly annoyed by the car's helpful verbal cautions and reminders, Glen becomes aware that the ultra-modern vehicle's accessories are failing one by one. The culprit is the Outback, the great sentient spirit of place that has taken on board every myth and icon and is reenacting them. As Glen encounters the avatars of the Outback he starts wondering if he's going mad. One of the people he meets is his own ancestor Arthur Steele, who died at Gallipoli. Although Glen knows Artie is a figment or a ghost, Artie persists in being real. Glen repudiates his reality and has to witness Artie's death in the hell of Gallipoli which is part of the Outback's cauldron of myth.

Glen rescues Artie at considerable sacrifice, but who is he really saving? The Outback presumably knows, but the Outback, with its many faces, voices and personalities, isn't finished with Glen yet.