Bandinangi (pronounce it BAND-ee-NANG-ee with a hard G is a moderately-sized Tasmanian town, not very far from Kissinhurst. A 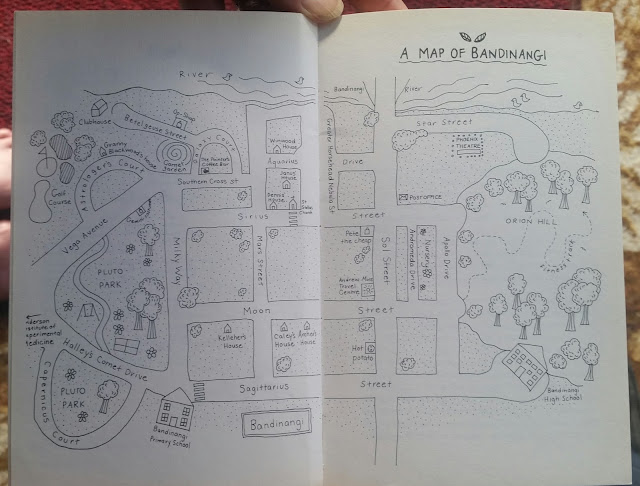 river runs through it. Bandinangi has been around for quite a while, even by Tasmanian standards. The Spinks family, of whom Juliana Case is a member, were there from the beginning. The Spinkses were explorers and (according to Blossom Archer, whose son C. George is married to Mellie Case) oddballs. Juliana quite agrees. If she hadn't, she would never have married the active and peculiar John Z. Case. (For more about the Spinks/Case/Archer family, visit HERE.

Back in the day, someone with a fascination for astronomy named the streets after celestial bodies. Thus the Case/Archer family lives at Number 13 Moon Street. There is also Milky Way Street, Sol Street, Andromeda Avenue, Greater Horsehead Nebula St, Sagittarius St, Sirius St, Vega Avenue and so on.

The long-term mayor is Villijicacki Broggen, a Hungarian Irishman, friend and rival of John "Pop" Archer, who runs the Hot Potato. Broggen owns an enormous dog names Hans Broggen whom Jeremy Archer walks sometimes... for a price. Hans Broggen is somewhat addicted to Sweet-Doggo-Trotdrops.  This is undoubtedly Jeremy's fault. Pete the Cheap Whickerson runs the grocery shop... (Mellie refers to him by a less flattering adjective) and there is a park, a nursery and a large library.

The main thing about Bandinangi is that it is - well - odd. It has a large populations of odd people to whom odd things happen. Very close by, but currently cut off from view, (or possibly in deep cover) is a witch community. Roseblight Zebrahoovesbackward is one of the nicest of them, and she currently manages to live in Bandinangi, using the name Rose Blackwood. Stephen Kelleher and Mathew Caley probably know this... but they're not talking.

Bandinangi, as well as housing odd people, attracts them. One year three very strange (even by Bandinangi standards) people arrived in town. Mrs Imelda Hieronymous, her brother Inigo Hauntman and their niece Serendipity Creed caused considerable consternation to the three Archer children. Then there was the vanishing magician, an invasion of ducks, and the scary plants (if they were plants) that grow from John Case's compost. An expedition of the planet Azurea, at some time in the future, will have ties to Bandinangi, and Lulu Quest and her father, (not to speak of the Bozo ghosts) will live near the river one day. (Just ask Mark Winwood about that... or maybe don't. After all, his brother Ben is "going" with Rose Blackwood.) The Dennis family, Donald, Jarrod and Dumone, may be the least peculiar people in town. Maybe redneckery keeps them immune. Father Tom Janus presides over the local church. He strives not to notice too much, though his daughter Evie, best friend of Justin Archer (to their mutual astonishment) notices all too much. (Her pet, Puss, is not really a cat.)

So, I guess you might say, Visit Bandinangi at Your Own Risk. Resolve to ignore, or else open your mind to oddity. Just don;t ever say you weren't warned.

Bandinangi appears in the Bandinangi Books series and also in others such as The Magician's Box, Hairy George and Spiral Stairs.