Over Here B&B is a bed-and-breakfast establishment situated on the outskirts of Patterdale, Victoria, in the 1980s. 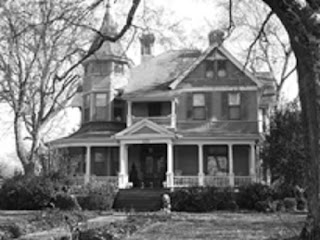 It is owned by the Peckerdale and Grene families, and originally served as a staging post and safe haven of sorts for family and friends transitioning between Over Here and Over There. Apart from this, it is also a functional B&B, running more or less like any other.

When readers first encounter it, in The Kissing Ring, it is managed by the newly-married Malachite and Leilana 'LeeLee' Grene. They are pixies, but Tom Merriweather and his father, who arrive at the B&B to stay, don't realise that at first.

The B&B is a late 19th Century building of three storeys. It has a small foyer leading to a hatch where the receptionist (usually LeeLee or one of her brothers) sits to take bookings and greet guests. Mal and LeeLee live in rooms on the ground floor, which also houses the kitchen. LeeLee's brother Alex has a room there, and her brother Kris occupies a tiny studio room in the attic which has a balcony big enough to grow a fig tree.

In between are guest rooms, singles and doubles. The stairs are narrow and quite steep, and can be disconcerting because LeeLee's black cat, Millie, has a habit of sitting on the steps or landings. Since he blends into the shadows, guests need to take care not to trip over him. No one seems able to keep him from doing this, so guests are warned--when LeeLee remembers.

The rooms are appointed with simple furniture, having beds, chairs, tables and a small bathroom each. Alert guests may notice the furniture is often too big to have fitted in the small 19th C doors, but they mostly don't question this. Presumably they suppose the furniture was taken apart and reassembled.

Room service is provided for breakfast, with old-fashioned crockery and tea sets. There is no option for packaged cereal, but porridge and toast and fruit are available. The B&B doesn't offer dinner (most guests go to the pub in Patterdale) but occasionally favoured guests are able to dine with the family. Although only Mal, LeeLee and LeeLee's brothers live there, other family members come and go and the place acts as an informal get-together for family dinners.

After Peckerdale Grene Community Tower is built, the B&B is less necessary for the family. At some point Mal and LeeLee move to the tower, but the family does keep the B&B going. After all, it provides some income as well as a place to stay, and it can help act as a "soft" introduction for human friends. Kris and his wife Calypso live there part of the time, since Calypso works in Appledore and running a B&B fits in with Kris's occupation as a freelance artist. It seems likely one of their children, Corin and Jisinia, will eventually take it over. If it's Corin, guests will feel very welcome and charmed. If it's Jin... not so much.
ABOUT THE BLOG