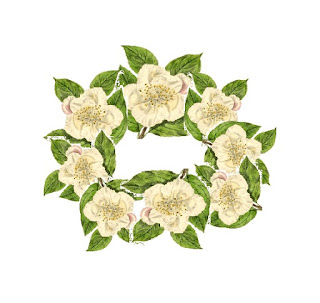 Some writers, most maybe, plan the big plot points in books. We also think about our characters although they don't always develop just as we expect. As more and more of their backstory and personality emerges, they become more real to their author and, with luck, to their readers.
It's the little touches that can creep up on us though. I've been reading a proof today and I came upon the following lines. This is a small scene in which Ash Colewin, a hardworking and over-serious young man, sees his father enjoying the company of a woman for the first time since his wife died.

Ash slowly circled the stalls, pausing often to scan the wedge of crowd that gathered at each. His father, white teeth bared in an unaccustomed geniality, conversed with a comely woman in Twentystoner garb. She wore a widow’s wreath on her cap, but the accompanying bunch of feathergillie hinted that she might consider putting it aside if an opportunity beckoned. She and Teak held apples in their hands, unbitten as yet.

Barberry Chalk is someone Ash comes to know well, but this is his first view of her. I wrote that scene and through the edits and proofs it has barely changed, yet it is only on this occasion, on the umpty-umpth time of reading through the ms, that I stopped to ask myself exactly what a widow's wreath looks like and what feathergillie is. I did come to a conclusion, but I can't recall what I was thinking, if I was thinking, when I first wrote the scene!