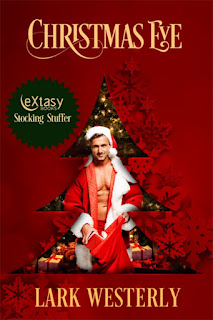 Christmas Eve is a brand new story published today. It's a new one in the Fairy in the Bed series. This one concerns a fairy midwife who gets an urgent call on Christmas Eve. Unfortunately, although Eve Adeste knows she's needed, she doesn't have the address. Enter Raph Angelus, who is driving a taxi that isn't his when he sees a brown-eyed beauty looking lost at the lights.

I had a lot of fun with Christmas Eve. It marks the fourth appearance of Frances and Niall, the couple whose Christmas 2016 romance launched the whole series.  If you want to read their story across four novelettes, start with Fairy on the Christmas Tree, then go to Hot Summer Knight, then to Tied up in Tinsel and finally to this one - Christmas Eve,

Each of the chapters has a Christmas carol title which took a little thinking out. The thing that took me the most time was coming up with a surname for my lovely Eve. I originally named her Eve Lullay, after the Coventry Carol, but after I read the words of the carol with more attention I realised it wouldn't work. I tried all sorts of names, and eventually took the problem to my sister. I explained the name, and what I needed, and she came up with Eve Adeste. I think that's perfect.

To buy this fairy tale Christmas themed romance, go HERE.  Just one small point - this one, as with all the others in the series, is for 18+ readers only. The cover is shared by several "stocking stuffer" stories.
Posted by Flora at 23:32