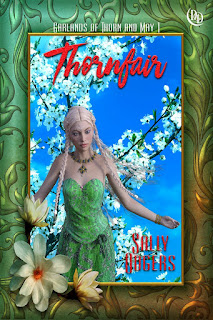 Thornfair, the first book in the trilogy Garlands of Thorn and May, has been a while coming. Back in 2006-7 I was writing metrical fantasy verse. The collection Fernseed for Fairysight was published in 2008 and one of the poems in that book was Willow, Willow. That is the story of a couple who fostered a child they found under a hawthorn hedge. It begins this way:

The child we found by the hawthorn hedge
was a sleeping son all wrapped in cloth
of a foreign weave with scallops on the edge.

We thought him a babe someone had lost
so we left a sign by the hawthorn hedge
and we brought him home to a cradle in the moss.


The story continues as the foster parents wait to find out what will happen. This poem isn't particularly long (324 words) but it played on my mind because there seemed to be more to it than that. After a bit I decided to take some of the theme, though not the story line, and write a book. I wanted to call it Garlands of Thorn and May, because hawthorn, with its beautiful white blossom and its vicious thorns is a recurring image. I got part way through writing it and then things happened. My mother, who was ill, needed a lot more care and I shelved the story. It kept coming back into my mind though. Every hawthorn blossom season, which happens to fall around my son's birthday, reminded me of it. It felt so real that it always came as a little shock when I remembered it existed only as a partial manuscript.

Finally I pulled it out, rewrote it and then asked the editor at Devine Destinies if it might suit the list. It was much too long, so I cut it in three. This wasn't difficult as it falls naturally into three parts. Thornfair, this book, introduces Rowan Amhill, a romantic 18-year-old who is fascinated by the tales of fairies and the hill. Her slightly younger cousin Hazel laughs at her, but Rowan is persistent. Both girls are longtime friends of Ash Coleman, who helps his unsociable father at his charcoal-burning. Hazel pretends to think Rowan is in love with Ash, but she's not - Then Rowan, wearing an old-time traditional dress, meets the fairy man Flynt dan Apfel. Ash wants to save Rowan from her dangerous obsession, but he has plenty of trouble of his own.

Thornfair is out now, and can be purchased here.  The website that explains more about the books, the world and the characters is here.  As of late 2018, Book #2, Summerfeste, is in proof-stage and Book #3 Crossover needs a bit more work. I hope to have that one finished and off to the editor soon.
Posted by Flora at 23:23