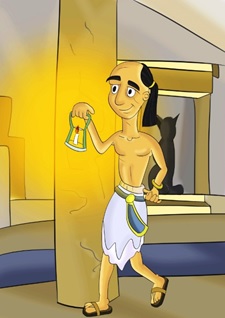 Source? His sister made sandals for him after he was chosen to work in the temple
Significance? Tau threw the sandal at Ramses Rat
Fate? He recovered and replaced the sandal and befriended Ramses
Author’s inspiration? A sandal seemed a likely thing for a young temple scribe to throw at a rat

And then a boy in a white linen kilt and flat sandals came to the door with a lamp. He set the lamp on a shelf and pulled the big door shut.

Ramses Rat encountered the flying sandal when he appropriated a honey cake in the Temple of Bastet. Tau the scribe saw him trying to remove the cake and tossed his sandal to scare Ramses away. When Ramses stood his ground, Tau admired his courage. Thereafter, the two became friends.

His eyes bugged. His mouth opened. ‘A rat!’ he said. ‘A thief in the Temple of Bastet!’
Slowly, he bent and took off his sandal. Slowly, he stood up. And then he threw the sandal at me.
One second, the sandal was flying through the air. The next, it landed on my back and then scraped down my tail. It didn’t hurt. It was a light sandal, made of palm fibre.
I was so cross I let go of the honey cake. I spun around on my haunches and chittered at the boy.
‘Why did you do that?’ I squeaked. ‘I am Ramses Rat and I was born in a V.I.P. Why did you throw a flying sandal at me?’

After an encounter with the great cat, Bastet herself, Ramses was granted the boon of limited human speech. Tau, Ramses the flying sandal and Bastet appear in Ramses Rat and the Great Cat, Bastet