Source? A hare named Hector
Significance? A loving remembrance of a familiar
Fate? Stephen still wears it around his neck
Author’s inspiration? I wanted Stephen to have something that implied one thing, but which meant another
First appearance? The Peacock’s Pearl and further in The Drake’s Diamond

Actually, Grandpa wears a lucky Scottish rabbit foot around his neck. I think that’s in pretty bad taste too. 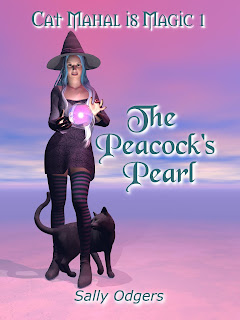 Stephen Petros is Cat Mahal’s grandfather, a Greek-born witch with a strong Scottish accent. Cat loves him, but she finds him disturbing. And it takes a lot to disturb Cat Mahal.
One of Stephen’s problematical aspects is the lucky rabbit’s foot…

He pulled a disc of clouded violet marble strung on a hide thong and snuggling up to his lucky rabbit’s foot out of his shirt and twiddled it. “Athenian marble. Amazing what you can get on-line. I really recommend a site called Tammy’s Treasures.” 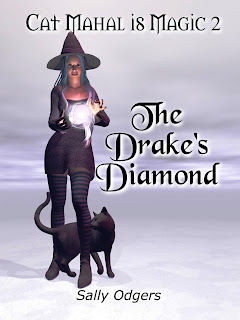 His wife, Olivia, accepts the rabbit’s foot as she accepts everything else about her odd family.

Grandma chuckled. “I know the feeling. Whenever your grandfather gives me a gift… it could be a lovely antique brooch or a chocolate spider or even a freeze-dried haggis.”
“As long as it’s not a rabbit’s foot.”
“Yes,” said Grandma, sneaking a glance at Grandpa who was pounding garlic with the bottom of the honey jar. “I must admit the rabbit’s foot was almost a deal-breaker when your grandfather proposed to me.”
“Why didn’t you make him get rid of it?”
“I couldn’t do that, dear. He’s had it longer than he’s had me. No, it was just one of those things. I had to take him whole or not at all. And that included the rabbit’s foot, the tam o’shanter and the ouzo habit.”

Later, in The Drake’s Diamond, Cat learns something that makes her rethink her stance on her grandpa’s luck charm.
For one thing, the “lucky rabbit’s foot” didn’t come from a rabbit at all.
Then he fished inside his collar and pulled on the leather thong he wore round his neck. Up came the cloudy purple marble disc and his lucky rabbit’s foot.
“Ugh,” I said. “Do put that away. You know I think it’s creepy.”
Grandpa stroked the foot with one finger. “This is my remembrance of auld Hector,” he said.
What?
“Auld Hector, Kitty-Cat. He was my familiar.”
“Your familiar was a rabbit?”
“A hare,” corrected Grandpa. “Witches and hares have a long and noble association. Hector came to me when I was fourteen and we were together until just a couple of years before I met your grandma. When he went I didnae ha’ the heart for another right away. One day, perhaps.”
“But it’s been years!” I said more loudly than I intended.

Stephen married Olivia quite late in life, so it’s evident the hare, Hector, lived a long time. Familiars in Cat’s version of reality do outlive their real-world animal counterparts.


The goal for 2017 was to write a post a day profiling the background behind one of my books; how it came to be written, what it's about, and any things of note that happened along the way. 2017 is well behind us, but I ran out of year before running out of books. As of May 2018 I STILL hadn't run out of books, but many of those still to come are MIA by which I mean I don't have copies and remember little about them. There are more new books in the pipeline, and I'm certainly showcasing those, but in between times, I'm profiling some of my characters, places and objects. Thank you so much to everyone who's come along on this journey so far!