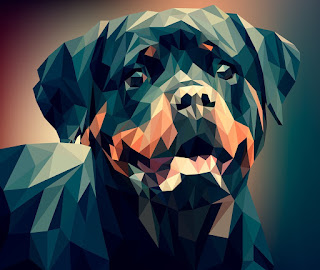 Okay, so mostly a dog would be a who and would come under the character umbrella. This case is different.

At eighteen, Linda Hobbs got a job as a dispatcher for a limousine service. She also moved into a flat on the ground floor of a house belonging to Geraint Trip. Mr Trip, as Linda always called him, was the perfect landlord. He was friendly and accessible, but he never interfered with Linda’s life. They shared an interest in cooking, and both liked their privacy, so they got along well.

Mr Trip worked in movie SFX, so Linda was used to hearing him testing his new gadgets upstairs. Her friend Jory was fascinated by the concepts and quite often spent time with the landlord. Linda wasn’t too pleased about this, as she thought Jory was encroaching on her territory.

One of the more useful functions Mr Trip fulfilled for Linda was in providing her with a virtual rottweiler. As a young woman living alone, Linda had arranged a code to use if she needed support. If she knocked three times on the ceiling with a broom handle or sweeper, Mr Trip would manifest the virtual rottweiler. Linda used this to scare off unwanted visitors, including at least one boyfriend who failed to show the proper courtesy in respecting her wishes.
“I told you to leave.”
“And what if I don’t?”
“Then I’ll have to hurt you.”
He sniggered.
“Or I can call my landlord to come down.”
“That dwarf? Oh, I’m so scared.”
Linda picked up the carpet sweeper and banged three times on the ceiling.
Footsteps sounded above, followed by a volley of barks and snarls and the eager clatter of claws.
Linda opened the door of her flat and raised the sweeper. “One more bang and Mr Trip will open his door. Care to test your mettle against sixty kilos of angry rottweiler?”
The boyfriend scowled and got up. “I’m fed up with you.” He stalked out the door and very quickly after she heard the roar of his motorbike.
She knocked the ceiling twice more in the prearranged signal for okay. Two answering raps sounded, and the row upstairs ceased.
Mr Trip, who was nearly forty years old, a hundred and sixty-five centimetres, and sixty kilos soaking wet, had turned off his noisemaker. Linda decided to make him a batch of extra-hot curry puffs as a thank you. It really paid to have a landlord who made his living creating effects for stage and film.

The goal for 2017 was to write a post a day profiling the background behind one of my books; how it came to be written, what it's about, and any things of note that happened along the way. 2017 is well behind us, but I ran out of year before running out of books. As of May 9th 2018 I STILL haven't run out of books, but many of those still to come are MIA by which I mean I don't have copies and remember little about them. There are more new books in the pipeline, and I'm certainly showcasing those, but in between times, I'm profiling some of my characters, places and objects. Thank you so much to everyone who's come along on this journey so far!