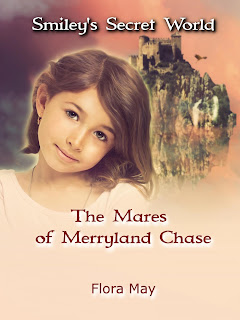 Source? Arrived with a deed of inheritance
Significance? This key unlocked a great adventure
Fate? Smiley lost it but regained it
Author’s inspiration? I invented the horseshoe key as a traditional symbol of entering a new land It’s also a nod to E. Nesbit’s The Story of the Amulet
First appearance? The Mares of Merryland Chase

The key didn’t look like a key. It looked like a silver horseshoe.
Smiley held it up between her finger and thumb for a better look while she chewed and swallowed. ‘Mirrandia,’ she said aloud. She liked the sound of the word. She was about to say it again when the horseshoe grew suddenly heavy in her hand.
Startled, she let it go and it dropped to the porch where it sat on its two legs. Smiley blinked. It had been the size of a coat button, but now it was a big as a flowerpot… and it was still growing.
Smiley goggled at the horseshoe. It was knee-high, and then it was waist high. In a few moments more, it was taller than Smiley. It glinted in the lazy sunshine. It reminded Smiley of the arch Dad and Liz stood under at their wedding, except that had been twined with flowers.
Arches are made to walk through, so Smiley stepped through.

Having stepped through into the land of Mirrandia, Smiley was quickly faced with a challenge in the shape of six regents, by appointment of the Most High Hilaria whose task it was to guide Mirrandia until the Most High Hilaria returns to take up the governance of this fair land,’ said a man with a red horse badge.
‘May she come in our lifetime,’ gabbled the last woman.
When Smiley pointed out that according to her deed of inheritance she was the Most High Hilaria and that she had indeed come in their lifetime, they were unimpressed. Charged with great deeds that must be done before she could take over, Smiley left on the first task which she accomplished before returning for her key which she expected would get her home.
‘I have solved the sticky problem of the Mares of Merryland Chase,’ she said again. ‘Now I have to take care of things in my own world. I need my key.’
‘Your key.’ Florian sneered. ‘What key?’
‘Florian.’ Carrie frowned and tsked. ‘Oh, you are impossible. Here, dear… I mean, High Hilaria. The key is probably in someone’s pocket. Not mine, unfortunately.’
There was a long silence.
‘Shall I call Master Po?’ asked Smiley. ‘I’m sure he will pick pockets again.’
‘No need for that.’ Francesca sullenly put her hand in her pocket and plinked the silver horseshoe on the table.
‘I expect you put it in there by mistake, right?’ said Smiley, picking it up.
Francesca gave a grim nod. ‘I had to keep it safe. If I’d left it on the table anyone might have taken it.’

Back in possession of her horseshoe key, Smiley returned to her everyday life in the knowledge that more tasks awaited her in Mirrandia.

The goal for 2017 was to write a post a day profiling the background behind one of my books; how it came to be written, what it's about, and any things of note that happened along the way. 2017 is well behind us, but I ran out of year before running out of books. As of May 2018 I STILL hadn't run out of books, but many of those still to come are MIA by which I mean I don't have copies and remember little about them. There are more new books in the pipeline, and I'm certainly showcasing those, but in between times, I'm profiling some of my characters, places and objects. Thank you so much to everyone who's come along on this journey so far!