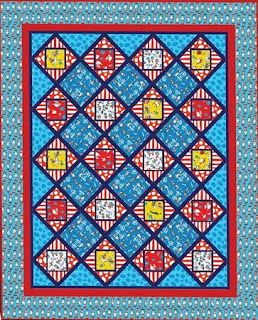 Iris Cottman was a hob maid, part of a large extended clan of hobs placidly living in the chalklands over there. According to her son Robin, some of the family came from Yorkshire a long time ago, and it's true hobs and people from the Yorkshire dales have a lot in common. That is, they did until modernity accelerated the human world while over there stayed comfortably rural. Iris used to go to harvest home dances with her cousins, and some years later she married one of the more distant ones. It was a good match. Jem Cottman was a fine baker who enjoyed outdoor work, while Iris herself had cottage garden fay talent. She had a touch with flowers and kitchen gardens, which extended to charming wells and making patchwork quilts. She made a great many of these in different patterns.

One of her favourite patterns was one called fairy rings. She appreciated the humour in the name. When her son grew up and settled in his own cottage, while simultaneously maintaining a life as a lecturer in mediaeval agricultural at a college over here, Iris gave him some of her quilts. He found these most handy when he decided to marry and acquired an opinionated young woman named Honeycomb Bakewell. Honey's approval of Iris' handiwork helps her son decide he's made the right choice.


He tossed back a couple of cushions, flipped up the edge of the seat and pulled out a sheet and a light patchwork quilt worked in exquisite circular florals.
“My mam’s work,” he said, displaying it. “Fairy rings, she calls it. She likes her bit of fun, does Mam.”
“It’s charming,” Honey said.
“Aye, well, a charm or three went into it, no doubt.” He smoothed the quilt, releasing a scent of summer gardens.

Iris' quilts appear in Honey and the Harvest Hob
Iris herself pops up in Man Overboard   The picture obviously isn't Iris' quilt, since the pattern is one I invented, but if you look up wedding ring quilt patterns you'll see some similar ones.