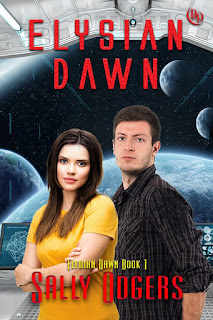 Source? Bought with considerable difficulty
Significance? Cornelia’s declaration of individuality
Fate? Unknown, but it seems likely she still buys it, or possibly makes her own

Cornelia brushed her grey hair out of her eyes with the back of her hand and grimaced. The grey hair was another of her attempts at individuality. In the second half of the twenty-third century, no one needed to go grey. In fact, it took a lot of attention and energy to do it, as almost all cleansers had Stay-colour built in.

On the surface, Cornelia Conti was a forgettable and conventional middle-aged woman with a penchant for drab clothing and free-form embroidery.
Her fifteen minutes of fame passed her by in 2254. She was thirty-five then, a grace-and-favour board member of a company called Outward-Bound, appointed because of her influential family. Cornelia was chosen to become one of the faceless four; the four whose simultaneous thumbprints were required to release the star ship Elysian Dawn from its moorings.
Eighteen years on, Cornelia is settled in a backwater life, still mechanically standing watches for Outward-Bound, but largely forgotten; not that anyone ever knew her. Despite appearances, and a certain weariness, Cornelia was far from drab and compliant by nature. She was stubborn. She struggled with a desire to make her own decisions, and to escape an increasingly inclusive and homogenising society. Her one outward sign of rebellion was her grey hair. Since most people didn’t want their hair to go grey, cosmetic companies added Stay-colour, an ingredient that prevented hair from turning grey in the first place, to all shampoo-style cleansers. Cornelia spent a lot of time and effort sourcing a shampoo that let her have what she wanted.

It was theoretically possible to buy cleanser without Stay-colour. As Cornelia had discovered, the absence of the word Stay-colour on the label was no guarantee it was not present. It might be there under any number of aliases. Ostati u boji was one. Bly kleur was another. Cornelia had lost count of the crafty labelling ruses, designed to erode her freedom of choice and restore her hair to its original brown or to turn it copper or blonde. And why? Why should cosmetic companies care if someone preferred her hair to be grey? She was fifty-three years old. Why should she not have hair that matched her age? It seemed so petty.

Why didn’t she simply make her own cleanser? The governmental regulatory body strongly discouraged anyone from making their own cosmetics and cleansers because such things wouldn’t be tested for allergens and would lack quality control. In much the same way, it was made difficult to buy ingredients for cooking. The best way to ensure a healthy population was to provide everyone with the optimum diet. One could buy ingredients, but the fumigation, grading, homogenising and quality control made such items inordinately expensive. It wasn’t illegal to grow a carrot (for that would be contrary to human rights), but the endless permits and inspections coupled with fines for unauthorised produce meant few people even tried.

That Cornelia Conti had achieved her desire for natural grey hair was a testament to her exceeding stubborn nature.

Cornelia and her shampoo appear in Elysian Dawn first book of the Elydian Dawn series. Cornelia pops up in other books in the series as well, but this is the one with her shampoo.