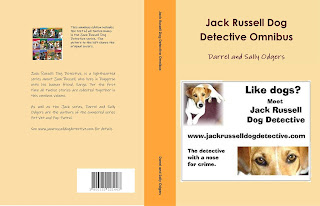 Declarations of Love Post 6. The Proud Dad: Foxie from The Jack Russell Dog Detective Omnibus
Declarations of love are a staple in fiction and they vary enormously according to author, audience, characters and situation. We mostly think of such effusions as romantic. We hope they're truthful, and we hope (usually) that they'll be made and received in a positive manner. Love's not always romantic though, so not all the declarations in this sub-set will be between romantic partners. This one is more of an implication than a declaration.

Foxie was a terrier, a n ex-street dog now living with Auntie Tidge Russell in Doggeroo. Although Foxie was now a devoted pet, he still retained some of his old habits, including a possessive attitude to his old boot. Jack Russell, his friend, tells the story. This scene is from late in the series, some weeks after Foxie ran off to visit Polly Smote, a miniature dachshund. Red is a setter, another friend of Jack's, and Preacher is Jack's young son.

The day after that, Foxie and his old boot disappeared.
Preacher, Red and I tracked them down to the river, where Polly Smote lives.
Mother dogs don’t like visitors when their sprats are tiny. But now Polly’s sprats were big enough to waggle their tails and yip. They were rolling around, growling and playing. Foxie was watching from a safe distance, keeping his paw on his boot.
‘What are you doing here, Foxie?’ asked Red. ‘Have you run away?’
‘Of paws not,’ grumbled Foxie. ‘Can’t a dog come and visit another dog? You three might be my pals, but you’re not my only pals.’
Preacher poked his nose into the basket of sprats. ‘Look, Dad! This fuzzy one is just like Trump and Jackie and Wednesday!’
I reminded him that his sisters were grown up now, like him.
Preacher sniff-sniffed a girl sprat. ‘Look at that spotty one, Dad! She’s just like Uncle Foxie.’
‘Foxie is a fox terrier,’ I said. ‘These are dachshund sprats.’
‘She still looks like Uncle Foxie. Look, she’s scratching her elbows, and she’s got an old shoe to play with.’
Spotty Sprat caught my eye. She put her paw on the old shoe. ‘Mine! Mine! Mine!’ she yipped.
I remembered dogs can be made up of more than one breed . . .