So, what’s a romboat? For that matter, what’s a skipsub? I do know, thank you very much, and I think you can pretty much guess what these craft are from their names. If you’re familiar with Replay, which has provided  a clutch of object lessons for this three volume edifice, you may have recognised the names Elfritha and Harrin as yet two more variations on the names of Hereward and Aelfthryth, the couple whose century skipping adventures fill that book. This episode is the latest one recorded, historically speaking, as the pair surface in 2309. As Aelfthryth put it;

This time round, I am a searoad gypsy and Harry a skipsubmarine warden (Only part time, of course, the rest of the time we're scholars.) We met up a year ago, when Harry beamed me a message to watch for the shoals.
Harrin… I thought, when I read his sig. That sounds a bit familiar… And I beamed him down a 'Hello' with my response.
And as soon as he caught my message, we remembered… have you any idea how fast a skipsub can go when it rises and planes the waves?
"Aelfthryth!" he yelled, and he hit the deck of my romboat running.
And of course, I flicked his nose. "I go by Elfritha now."
"But I," said Harry, "am going to call you Aelfthryth." 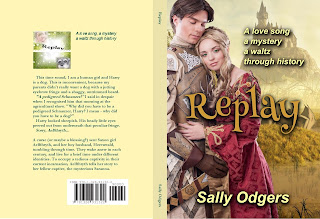 They’re back together for another go-round, though as Aelfthryth said, this won’t be a long one. She was no longer talking to the heriad-elect Saranna, because of course Saranna would have died in the late 2st Century. The last we heard from Saranna was in 2027, when her daughter Aelfthryth (Alexis or Lex) was eleven. Presumably one of Lex’s descendants was the heriad in 2309.
So, back to the boats. Elfritha’s romboat would be named after the Rom or Romani. Since she was a searoad gypsy, she would be a modern rom with a boat, which I see as a flat barge, (outwardly at least) in place of a varda. Harrin’s skipsubmarine would be a boat capable of travelling underwater and also of planning across the waves. So, there we have it; centuries after Aelfthryth in popinjay plumage sailed on the privateer Silver Hart, and before that on a Spanish ship; and also centuries after the 1835 voyage Alfey and Hendry took from England to Sydney Town, they were back messing about in boats.