The d'Chevalier Fief Ring
From Court in Between (coming soon) 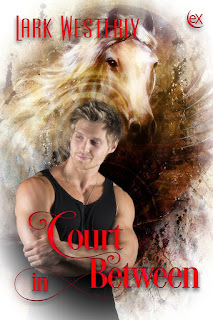 Court Leopold had life exactly as he liked it. His indie band, Courtesan, was doing well, and allowed him to indulge his love of performance. He looked forward to continuing on his current path for at least the foreseeable future.
A festival encounter with Yvanne, an old friend from his childhood, caused the first blip on his radar. Yvanne brought a message from his mother, Cari, couched in uncharacteristically blunt language. She had to see him today. Now.
Puzzled and only mildly annoyed, Court met her in a pub. Cari, expecting his fourth half-sister with her husband, informed Court she had an obligation to give him something she'd been carrying around for twenty-five years and nine months.


She dipped her free hand into her pocket and drew out a heavy gold ring with an indecipherable crest. She held it up and Court stared at it, and then at his mother.
“It’s a courtfolk fief ring,” Cari explained. "It's yours by blood,” she added, offering the gold ring in her palm.
He shook his head in confusion. The ring was tempting as a prop for Courtesan, but that was all.
“Your father laid it on me to give to you,” she said.

“I see.” He didn’t see, but he hoped to get through this quickly. A new song was nudging at his mind. My Father Left to Me His Ring… He held out his hand.


Cari drew back. “I have to give it to you, but you need to know the conditions.”

The conditions were strange enough, but didn't sound too onerous. Anxious to get back to the festival for Courtesan's next performance, Court took formal possession of the fief ring.

Cari took his hand and slipped the heavy gold circlet into place. It fitted as if made to measure. The crest, whatever it was, looked like a blurred smudge. Either the ring was implausibly old, or poorly worked, or the whole thing was some elaborate hoax perpetrated by his putative father on his credulous mother. He hoped that was so but he didn’t believe it for a minute. Great-Grandpapa Baptiste Leopold would never have countenanced that. He’d been a wily old bird and that he’d apparently connived at this unholy deal must mean he’d expected something good to come of it.

Court returned to his festival, more concerned with the performance than the d'Chevalier fief ring. However, that night he found he should have been concerned.

He unclasped his hands and swore as an electric tingle ran up his right arm. He must have pinched a nerve. No, the discomfort centred on his father’s fief ring. Too tight? Or had he just crushed his fingers together against the broad band? He shook his hand to stir up the circulation. It would be funny if the ring flew off and rolled in under the bunk.
The ring stayed in place, snug on his finger. He twisted it with his left hand and it moved easily. He spread his fingers and examined them. There were no pressure marks or grooves.
“Ouch,” he said. It didn’t hurt, exactly but it was a better-not-there feeling, a tingling of discomfort.
He gripped the ring with his finger and thumb and tried to draw it off. He’d formally accepted it, but that didn’t mean he was obliged to wear it. Cari had kept it in her pocket, and so would he.
The ring wouldn’t come off his finger.

The d'Chevalier fief ring was about to make Court's life very, very, strange.
Posted by Flora at 16:18