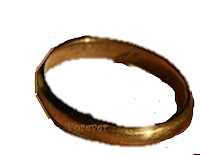 In respects to writing fiction, value adding is the art of adding extra detail that serves more than one purpose to an object, event or character. In a just-finished manuscript, Henry Dark, who featured in a character post last year (yes, really...) referred to Gemma Creed as his fiancee. She questioned this, and the little scene played out with Henry giving Gemma a ring.

Since Henry hadn't come to the music festival with the expectation of getting engaged, although he'd certainly wanted to improve his acquaintance with Gemma, I had to come up with a plausible way for him to have a ring. First I thought of a ring-pull then I thought the size would be wrong. Then it came to me, as these things do. Henry delves in his wallet and extracts a worn gold ring. He'd already mentioned his mother had died a couple of years ago, and he now explains to Gemma that she wanted to be buried with her wedding ring, but her engagement ring went to her daughter. To her elder son she left her eternity ring, and to Henry came her own mother's ring, which she'd worn on a chain around her neck.

This ring made sense. Henry is peripatetic, so he would carry it in a zipped compartment in his wallet. Having a family ring makes much more sense than having to find a new one at a moment's notice.

During the rewrite, I wanted to value-add to the ring. Since Forever is a catch-phrase in this book, I thought first of Victorian REGARD rings that spell out REGARD in stones - ruby, emerald, garnet, amethyst, ruby, diamond. (I have two antique ones.) When I came to try to spell out FOREVER, I came up with ? opal, ruby, emerald, ? , emerald, ruby.  I did a little research. There were three possibilities for F-gems; feldspar, fluorite and fire opal. Fire opal might be cheating a bit... The other two don't really ring with romance.  Now came V. Oh dear. Variscite is the only one I could find. Nevereardofit. I quietly dropped that idea.

Then I had the notion of the word etched into the ring. Since the ring is an old one, I thought the letters might be a bit blurred, so Gemma resolves to try a brass-rubbing to reveal the word. Before she goes to that length, she asks Henry, who tells her the word is FOREVER.

Awww, Gemma thinks. Henry, being Henry, tells her the real and much more prosaic reason. This ring was made from a gold nugget one of his mother's ancestors found in the Forever Mine during the gold rush. There you are - value adding. This gives the ring more antiquity, and a better back story. It gives Henry's character a little extra touch.

He tells Gemma it's just temporary, until he can buy her a ring. Naturally, she says she'd like to keep this one.