The Leopold Seal Fief Ring
From Court in Between and Counterpoint

Source: It was passed down through the Leopold family
of Leopold Manor
Fate: Currently in the possession of Nanette Leopold Fanshaw who had it repurposed into an earring. 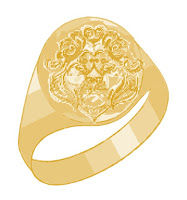 Baptiste Leopold was a stiff-necked old courtfolk man who thought a lot of Family with a capital F. To his probable dismay, he and his wife Fleur had one child: a daughter they named Catharine. Catharine married a distant cousin, so she retained the Leopold name. Baptiste presumed all would be well, but his daughter and her husband died in an accident when their first (and now only) child Nanette was very young. Baptiste and Fleur took Nanette in and brought her up.

Through another peculiar set of circumstances Nanette's first child, her son Delacourt, also bore the Leopold name. Her four daughters had their father's name; Fanshaw. When Baptiste finally died in his nineties, his great-grandson was left the only male in the family line and he assumed he would inherit the Leopold fief ring, a gold ring bearing the Leopold lion seal. He was a bit surprised to discover, years later, that Nanette had it and had turned it into an earring.  The reason she gave was that he was in line to inherit his father's ring and couldn't rightly have two...