Sam and the Sylvan 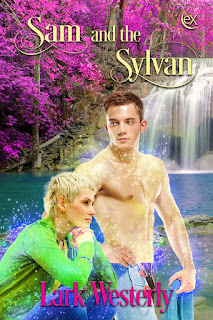 Sam and the Sylvan is the latest title in the Fairy in the Bed series. I had a lot of fun writing this one and it reaches back to an earlier title and forward to an upcoming one.

Way back in 2017, I wrote a novella for KU. Once it finished its tenure there it became available elsewhere. That one is called Green Balls and is the first story about Peck Grene, who has become a series regular. I love Peck. He's outspoken, jealous, cranky, and kind... a typical pixie man, in other words. He also has the awkward attribute of looking like an eighteen-year-old when he's actually twenty-eight. In that story, Peck met a sylvan named Oash in embarrassing circumstances. That is, Peck was embarrassed. Oash... not so much. Oash was single, and I always wanted to know what happened after the meeting with Peck.

This is that story. It begins with a meeting in a pub. Peck and Chloe, his fiancee, encounter a strange woman arguing with the barmaid. Sam wants a beer. The barmaid won't serve her. Sam, who is in her mid-thirties, is understandably annoyed, especially when her photo-ID is rejected as a fake. Peck sees her as a fellow-sufferer, and he and Chloe invite her home for supper.

Peck's soon regretting this, and as for Sam... she's in a dilemma. Sam sees herself as a professional stray, grabbing anything she can get because life isn't doing her any favours. She is tempted to take any advantage she can from this fortunate young couple, but on the other hand she finds she does care what they think of her. Then Peck's young cousin Tabor gets in on the action and Sam is even more rattled. She eventually meets Oash and the fall-out from that encounter threatens mayhem on a grand scale. It all ends happily, of course and hey - I got to like young Tabor, so he gets a book of his own! That one will be out later this year and will be called SUNSHOWER.

Here's an excerpt from Peck's point of view at the beginning of Chapter Two (called SOUP)...

Peck didn’t like the way their new acquaintance was looking at Chloe. He didn’t like the way Chloe was looking back. He knew it was just his pixie jealousy asserting itself and reined it in with a ruthless hand. It was his fault for interceding in the first place.
He should never have let curiosity overcome him. He should never have rubbed up the green. It was too late now. Chloe was already extending an invitation to Sam Silver to share a late lunch at the tower. He arranged his face in a mildly hospitable expression and hoped she’d refuse. What lone woman accepted an invitation from a weird couple who’d picked her up in a pub?
Sam Silver did, evidently. She closed her laptop. What was she doing with a laptop when any normal young woman used a tablet or smartphone? She picked up a handbag, a large and shabby one that looked as if it had been around the block more than once. What young woman used a handbag anymore? She stowed the computer in a backpack and shrugged it on. How did a backpack equate with a handbag? And why in the name of the original forest was she wearing a short, tight dress in that shade under her mannish coat and above those heavy boots? Peck tried to work out what colour it was. Chartreuse? Cerise? Magenta? No, surely chartreuse was a shade of yellowy-green. Fuchsia. That was it. A peculiarly harsh hue on the purple side of pink. It looked horrible with her drab pale skin, which should have been café au lait but just missed it. And ruched.
Peck’s fingers tingled with the urge to send that garment packing, but that would leave the woman in her underwear unless he conjured a replacement at the same time as he dismissed the pink article. She’d look okay in green—better not go there. A nice sunshiny yellow would work, or a subdued silvery-brown...if such a colour existed. Creamed honey would be perfect if she had a good bath to stir up the colour in her face.
Stop that.
He knew exactly what was wrong. He’d elbowed aside the green-eyed jealousy inherent in most pixies but almost unleashed the fix-it aspect instead.
Sam Silver didn’t need him to fix her situation. She was older than him, even if she didn’t look it, and so what if she had no eye for colour. She probably wasn’t as grubby as she looked. She smelled okay…rather like sandalwood.
He became aware the women were staring at him expectantly. “Um?”
“‘Um, he says,” Chloe expressed.
“Sorry?”
“Peck, love, darling, sweetness, are you going to stand there all night? Jodie’s already giving us the evil eye. She thinks we’re heading off for some unspecified but probably immoral and sexually deviant activities.”
“We’re not, though, right?” Sam said, eyeing Chloe with a fascinated gaze. Peck didn’t blame her. He was fascinated with Chloe himself.

I did enjoy writing Sam's story and giving Oash a typically cock-eyed romance.  I got to indulge my fascination with music, cultures, colours, names and lots more. I got to invent a brand new musical instrument called a woodlyn. I also unintentionally gave the cover artists a headache by giving Sam short hair! Evidently cover models with short hair (and clean shaven ones if they're men) are extremely thin on the ground.  I have a copy of Sam and the Sylvan to give away, and also copies of four more stories in the series. If you'd like one, just comment on this post with the title you'd like and I'll be in touch. First in, first served.
Available titles are Sam and the Sylvan, Wish Matched, The Kissing Ring, The Courting of Eileen and - hey - Green Balls!


Sally is Sally Odgers; author, manuscript assessor, editor, anthologist and reader. She runs http://www.affordablemanuscriptassessments.com and Prints Charming Books. (Sally is me, by the way, and I am lots of other things too, but these are the relevant ones for now.)

The goal for 2017 was to write a post a day profiling the background behind one of my books; how it came to be written, what it's about, and any things of note that happened along the way. If you're an author, an aspiring author, a reader or just someone who enjoys windows into worlds, you might find this fun. The books are not in any special order, but will be assigned approximate dates, and pictures, where they exist. 2017 is now behind us, but I ran out of year before running out of books, so the blog will continue for at least the next month or so.