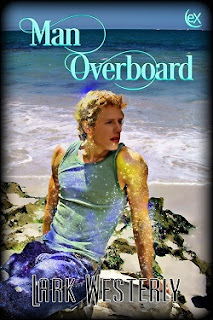 My stories aren't about problems. I prefer the term challenges. Even then, my books are not about challenges. They're about characters who have challenges. There's a subtle difference. Zachary Rowan has a lot of challenges in Man Overboard. Being an ordinary-looking young man who has a romantic temperament is one of them... being stranded in the middle of the ocean is another...but there's also the challenge of his job.

Being an early childhood teacher wasn’t in the same league as being a monk, but there were good odds that any woman he went out with would be related to at least one of his current, former or future pupils so he’d always been circumspect. It didn’t come easily.

As he says to a woman he's just met who asks him why he's not taken...

I’m afraid I’d meet the woman later on at a school function. I teach five-year-old children. It’s what I do. I’m good at it, and I want to go on doing it. Any woman I played games with would inevitably turn out to be someone’s aunt. That would be a bad situation whichever way I buttered it.”
“Why?”
“Getting friendly with a woman’s toes and then discussing her nephew’s finger painting just isn’t the way it goes.”
Jin shook her head at him. “Strange, strange man.”


He looked down at his bare feet. “I suppose so. Are you someone’s aunt?”
“Not as far as I know.” Jin was reasonably sure Corin would have told her if she was.
“That makes you perfect, unless you’re someone’s mother? Or someone’s wife or partner?”
“I’m no one’s anything beyond the obvious.”
“And as we’ll never meet again I’ll be safe from compromising consequences.”
“How do you know we won’t meet again?” she asked.
“I’m sure you’ll make damned sure we never do.”