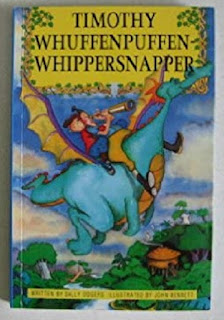 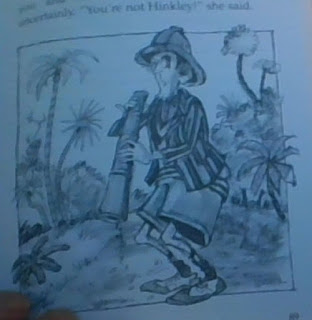 The fellow with the peashooter advanced cautiously, weapon at the ready... As he came closer, Marcus could see that this weapon was a long piece of bamboo with a mouthpiece at one end.

Marcus Whippersnapper, his dragon Timothy Whuffenpuffen Whippersnapper and Great Uncle Hinkley's fiancee Petronella Patella were hunting for Hinkley who had moved several times with his Circus of Wonder. They thought they'd found him when someone started shooting at them. Marcus was quite relieved to discover the missiles weren't bullets, but peas.

As it turned out it wasn't Hinkley at all, but Antony Andrew Winterbottom, who had signed a seven year contract to manage the Circus of Wonder. Most of the acts objected to the change in management, especially the Flying Gonzaloonies, who had staged a rebellion; hence the peashooter.  Once Antony Winterbottom discovered he wasn't under attack, he dispensed with the peashooter and eventually Marcus managed to sort out everything to good advantage.

Antony and the peashooter appear in Timothy Whuffenpuffen  Whippersnapper
Posted by Flora at 06:00