Oash and Sam’s
Sweetwood Tree
From Sam and the Sylvan 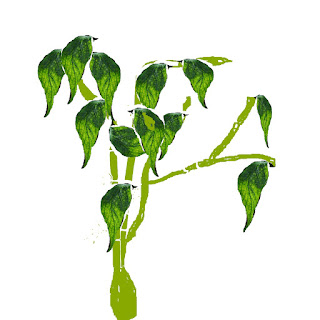 Source: It was a species that grew in the pixie forest
Significance: It was a catalyst in Sam’s meeting with Oash, who leveraged an existing custom to stretch the time they spent together
~~~~~
Now that she was there, she might at least have a look at that weird sweetwood tree.
Sam Silver, misfit and all around disaster area, had come over here to the fay homeland with Tab Merriweather, a halfling who was trying to do her a good turn. He left her to her own devices after explaining that the fruit she thought she could smell was actually a sweetwood tree. He told her a few more things, too, but Sam had a case of information overload.
Sam approached the tree with caution and raised her hand to brush the lowest branch. It was formed almost like bamboo, with nodules every few centimetres. It was smooth and certainly soft. She dug her thumbnail into the bark, finding it tough but yielding, somewhat like a green banana skin.
She broke off a branch to see if it tasted as good as Tab said.
Snap! The report wasn’t loud, but Sam jumped. The branch had broken off at a nodule, as neatly as if it had been cut. Beads of golden sap oozed forth, and Sam dabbed at one with her fingertip. It was sticky like nectar or very thin honey, and she touched it to her tongue.
She was about to have another go when someone interrupted her.
“Greet you, maid!”
Sam jumped and turned to face the speaker. It was a woman of around twenty-two, wearing a tunic very much like the one Tab had conjured for Sam, save that hers had a wide sash. She was tall and rangy with a coltish grace and a tousled cap of curly warm-blonde hair. She smiled at Sam, her brown eyes narrowing like a lazy cat’s.

Oash wasn’t twenty-two and she wasn’t entirely female, either. She’d chosen to appear to Sam in that particular guise because she thought it would seem unthreatening. She also pretended she’d been just passing when in fact she’d been trailing Sam for a while. She explained to Sam that what Tab had said was true; if one broke the branch of a sweetwood tree, then one was obliged to use the branch to make a flute.
“I wasn’t planning to make a flute.”
Surprise and a little disapproval phased over the girl’s face in a ripple.
Sam’s heart sank. She’d obviously transgressed. “I’m sorry. Am I supposed to?”
“You broke the branch and drank the gift, so it’s only proper to give back music.”
“I didn’t know that.” Tab had said you could make the wood into a flute, not that you had to.
“Come with me.” The woman looked at her steadily. Then she tucked her flute back in her sash and took the branch from Sam’s hands. She turned and walked rapidly through the trees, glancing over her shoulder and signalling for Sam to come too.

Sam stayed on with Oash while her flute cured and then while she sanded, polished and refined it. Secrets and truths came to light along with the flute and though it was a bumpy road for a while, eventually Sam and Oash, two misfits who loved music, set up household together. Of course, that sweetwood was always their sweetwood tree.

Sam and Oash weren't the only characters to have sweetwood flutes. Tab Merriweather had one and so did some of the treefolk. Music and sweet sap were just two useful attributes of the tree. The leaves yielded a sweet-smelling colourless oil that could be used to improve the texture and smell of salves.
Posted by Flora at 07:30