Lore Mor Arlodh’s
Soothing Salve
From Xanthe and the Seaman 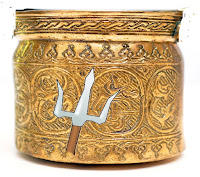 Source: Lore inherited the recipe from his grandsire, Mull, and added some refinements.

Next to the tray was a stoneware pot with a tightly-fitting lid.

When seaman Lore Mor Ardlodh rescued Xanthe Persimmon from the midsummer tide, he decided to keep her for a while. Her trip along the cliffs and the aftermath left her with superficial sore patches. Lore’s manners were not much like the courtfolk men’s Xanthe knew, but neither were they as bad as the reputation of his order of fay. He was at least approximately civilised in some ways. Therefore, he fed his unexpected guest well.
Having eaten a fine breakfast, or possible supper, Xanthe considered the stoneware pot, hoping for dessert.
She unscrewed the lid and looked at the contents with a wrinkled nose. It smelled of seaweed in the sun. She touched it with her finger and sniffed it.
“Faugh! I’m not eating that.”

Lore informed her it was just as well. The stuff was an excellent soothing salve his grandsire had invented and supplied to a braefolk woman for her husband. The smell was pungent and Lore said it was necessary for the braeman to agree to use it. He’d inherited the recipe and added a few refinements that made it more pleasant to use.
…he flicked his fingers, summoning a small matching cruet. He scooped some of the paste into his palm and added some drops of colourless oil. The gooey substance turned translucent and the smell vanished to be replaced by something much more pleasant.
“Oil of sweetwood,” he told her, working the stuff with his fingers.
That wasn’t the only addition, but it was the only one he was prepared to name. The salve was so effective Xanthe wanted to have some to take home to her mother.