X and the Pony 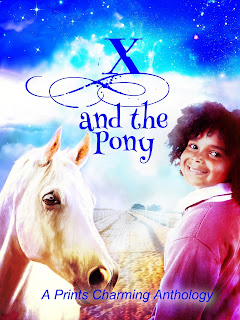 X and the Pony  is another anthology which I ringmastered for Prints Charming Books. As usual, I collected the stories and put them into order (this time alphabetically by title) and then wrote or organised the extra material. Apart from several pony stories, this volume has photographs contributed by one of the writers, pony poems, a list of pony words and definitions, a list of favourite pony books (thank you to all the FB friends who contributed their opinions), some pony facts, and a couple of essays on pony books (thank you Jane) and pony names in fiction. The stories range from the traditional to the weird... which I can say without fear or favour since I wrote what is probably the weirdest of them myself!) The stories are for children, but I think a lot of adults would find the lists of books, the essays and the glossary providing a nice nostalgia trip. For anyone interested in these anthologies, check out Prints Charming Books at  the link below. We always have at least one anthology on the go.

The goal for 2017 was to write a post a day profiling the background behind one of my books; how it came to be written, what it's about, and any things of note that happened along the way. If you're an author, an aspiring author, a reader or just someone who enjoys windows into worlds, you might find this fun. The books are not in any special order, but will be assigned approximate dates, and pictures, where they exist. 2017 is now behind us, but I ran out of year before running out of books, so the blog will continue for at least the next month or so.
Posted by Flora at 15:55