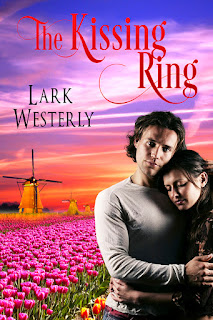 The Kissing Ring is the most recent (as of now) title in my Fairy in the Bed series. I have a lot of fun with this series because it offers some of my favourite things- fantasy, world building, and the chance to follow a large cast of characters through multiple books.

The first story in the series was set in December 2016, the same year it was published. It was supposed to be a one-off, but I had such fun with Fairy on the Christmas Tree that I asked the editor if I could do an Easter story. She said yes, and I wrote Horizontal Bunny Hop. Just for fun, I gave Frances Eckman, the heroine of the first story, a tiny off-stage role in Bunny.

When authors were called for to do a midsummer set of stories, I made my new heroine Frances' cousin, and gave Frances a role in the story. By now, I had the bit between my teeth, so I ventured on another one, introducing Peck Grene, an odd young man who looks a good decade younger than he is. Peck has an older cousin named Ryl, married to Tom... Ryl is in her early forties and Tom is six years older.

Now, all these stories are contemporary, taking place in 2017. More stories followed, but then I wrote a retrospective to tell how two of my favourite characters, Si and Skye, first met. Since they had an adult daughter as of 2017, I had to set that one back in the 1980s. Si, a friend and contemporary of Tom, met a just-teenaged Ryl in the early '80s...

I always wanted to tell Ryl and Tom's story, but I hadn't got around to it until I was trawling through some "spare" covers the publisher offers as writer-inspirers. I found a couple posed against a background of tulips. Because I'm fond of flowers, I asked if I could have that cover. It devolved that the couple on it had been used on another cover, so the artist replaced them with another pair. As soon as I spotted them I knew who they were. Having thoughtlessly put a gap of six years between Ryl and Tom, I had to work out how to account for their courtship. Because of things mentioned in other existing books, I had a few other things to deal with. For example, they had met when Ryl was still at school, had their first child eleven years later and married just before the first child was born. Why the long gap?

My writers' serendipity (the odd thing that happens to writers when they discover a throwaway fact becomes vital later on) kicked in and the odd timing around Ryl and Tom's romance actually worked FOR me, giving me the plot.

The fact that the cover existed before the story actually helped to mould the story. Tom is wearing a cream pullover which I wove in as an important sub plot. Then there are those tulips and windmills... Fortunately, there is a large tulip farm not far from where part of the book is set. It was around in the 1980s but I didn't use it. I just borrowed the concept and produced Marieke's Kleine Nederlanden. Luckily, Mum's cousin was married to a Dutchman, so I grew up familiar with Dutch people.

So, there it is. The Kissing Ring takes place just around and after Wish Matched, and catches up with Si and Skye after the end of that story. The fall out from The Kissing Ring influences events in the forthcoming contemporary books Sam and the Sylvan and Sunshower, and, just for fun, I popped back in time to the late 1960s to write Midsummer Melody, telling how Ryl's parents got together. Each book and story in this series stands alone, but interested readers can follow favourite characters along. To keep my timeline and relationships clear, I have a timeline and a character list at the website http://www.larksinger.weebly.com

The goal for 2017 was to write a post a day profiling the background behind one of my books; how it came to be written, what it's about, and any things of note that happened along the way. If you're an author, an aspiring author, a reader or just someone who enjoys windows into worlds, you might find this fun. The books are not in any special order, but will be assigned approximate dates, and pictures, where they exist. 2017 is now behind us, but I ran out of year before running out of books, so the blog will continue for at least the next month or so.
Posted by Flora at 23:02