Triple Treat is a romantic novel; the third in a trilogy that began with In Search of a Husband (1997) and continued with Mix and Match (1998). Marcus Sutherland, from the first book, was friends with Jasper Diamond, from the second book, so the books weren't all that closely related. In book three, Triple Treat, Jasper's twin sisters, known as the Diamond Duo to the society pages, staged a joint engagement party and, on a whim, invited Jasper's mousy PA, a casual friend. The party was a disaster, and ended with the twins summarily disengaging themselves from their fiances and Ellie, the PA, realising her life has narrowed so far she barely has room to breathe. The clueless twins make helpful suggestions for things she ought to do... all of which predicate on a background, finances and opportunities Ellie doesn't have. Finally, she snaps at them and they announce their intention of walking a mile in her shoes... Meanwhile, the jilted fiances are not pleased, and one of them's gunning for Ellie. John Parish, the charming conman from In Search of a Husband makes an appearance, and the whole story becomes a game of musical chairs.
This story was due to be published in 1999, but the upsurge of Amazon and deep discounting brought the company's romance line down, and so it was never published. I have the rights back, along with the rights to the first two, but they're set in the 1990s. Updating them would be awkward, as so many plot points depend on the world as it was then. I could print it at Lulu and/or put it out as an ebook, but I'm not sure whether there's any desire out there for comedy adventure romance set in the late 1990s. I suppose it's nearly old enough to be Nostalgia Period? 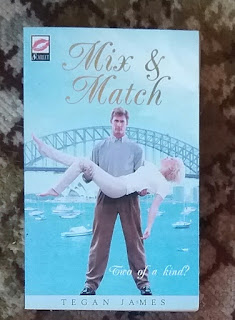 The goal for 2017 was to write a post a day profiling the background behind one of my books; how it came to be written, what it's about, and any things of note that happened along the way. If you're an author, an aspiring author, a reader or just someone who enjoys windows into worlds, you might find this fun. The books are not in any special order, but will be assigned approximate dates, and pictures, where they exist. 2017 is now behind us, but I ran out of year before running out of books, so the blog will continue for at least the next month or so.
Posted by Flora at 23:29